And now I have the Brental Floss version of the Punch Out stuck in my head.

Also, catching up on news, Diddy Kong is back, I'll update if I catch up on any more.

Waluigi is a assist trophy.  Well isn't Wario getting a lot of friends.
http://www.siliconera.com/2014/02/26/waluigi-assist-trophy-next-super-smash-bros/

Spoiler:
Yes, I know what it is, you don't have to tell me.

For those who didn't watch the Direct (all three of you):

- 3DS game coming on Summer, WiiU game on Winter. Both games have the same roster, but different stages (also, the 3DS version only has 2 songs per stage).
- Online multiplayer among Internet Strangers can be For Fun (random stages, all items) or For Glory (No Items, Final Destination).
- Speaking of Final Destination, all stages have an FD mode (flat, hazard-free).
- Characters who could turn into other characters no longer do so (probably because of 3DS limitations). So Zelda and Sheik have different Down Specials, Samus' Final Smash no longer dismantles her armor, and I'm guessing Charizard doesn't get to share his spot with the other two.
- On the bright side, Zero Suit Samus has been rebalanced courtesy of her high heels that double as jet boots.
- Yoshi's confirmed. He stands upright now, but seems otherwise the same.
- Showing Assist Trophies and Pokemon in action. Highlight being the Pong Bars.
- More descriptions about the new challengers (Villager, Megaman, Wii Fit Trainer, Rosalina, Little Mac). Highlight being Megaman's Final Smash, in which he summons all the Megamen to blast the opposition.
- Finally, Greninja, the ninja frog pokemon from Gen 6, has been confirmed.

you missed out some peices of important info.

-Sheik is playable as a character seperate from Zelda
-Charizard is now his own character, so probably good bye trainer.
-lucario and charizards final smashes are there megaforms.
-pits final smash is now the 3 sacred treasures, could mean palutaina may be playable, heres hopeing.

I tried to watch it, but nintendo direct was down because of all the traffic(also, Diablo).  Watching it now.
https://youtu.be/7xUWnQu2Grs

But yeah, a bunch of awesome changes, and a new cinematic


I'm not sure how I feel about Zero Suit Samus having high heels...  I mean it's great that they rebalanced her, but I just seem to remember Nintendo going to Team Ninja(for Metroid: Other M), "no high heels", and Team Ninja does it anyway, and now Smash Bros's Zero Suit Samus has high heels that serve a purpose...  Feels weird man...

But yeah, Greninja looks awesome as hell!  He looks like he would be very fun to play as.  Charizard looks fun too.

Rainday wrote:I'm not sure how I feel about Zero Suit Samus having high heels...  I mean it's great that they rebalanced her, but I just seem to remember Nintendo going to Team Ninja(for Metroid: Other M), "no high heels", and Team Ninja does it anyway, and now Smash Bros's Zero Suit Samus has high heels that serve a purpose...  Feels weird man...

I didn't like the appearance of the high heels much either if they were pure blue to match the rest of the suit I might have a different tune of course. Also I think they are being too hasty including a Pokémon XY Pokémon before it has been established which are the most popular. Also which MegaCharizard is the Final Smash X form or Y form?

Hornofdesolation wrote:I didn't like the appearance of the high heels much either if they were pure blue to match the rest of the suit I might have a different tune of course. Also I think they are being too hasty including a Pokémon XY Pokémon before it has been established which are the most popular. Also which MegaCharizard is the Final Smash X form or Y form?

I think they have had enough time to determine which is more popular(Greninja having Protean probably helped), plus Greninja probably has the best body type and fighting style to fit Smash.  My opinion mind you.

As for Charizard's final smash, it looks like X, I suppose because it's more different visually.

Yep, I meant X, my bad.  The other two are okay, but not on the same level for me.

Though I never played Awakening (Or ANY Fire Emblem for that matter), that is pretty exciting.
http://www.smashbros.com/images/character/lucina/screen-8.jpg

Selectable-gender Robin too. Male voice is clearly David Vincent, and I'm guessing the female voice is #1, which is listed in places as Michelle Ruff. No Chrom main, but it looks like he gets to be the bromantic Final Smash of Robin. And I always love some Laura Bailey.

I saw that image earlier, it made me very happy =) These new female editions to the roster make me happy beyond compare~ Though I do wonder... Will there be room left for the villains? We got some sorta villains with Bowser and King Dedede(I say sorta because they do team up with you in certain games), we don't have confirmation of Dark Pit(or Game and Watch)... COME ON VILE, MARX, AMAZON PANDORA/MEDUSA, AND SOME EVIL HOTNESS FROM FIRE EMBLEM!

(Though really, Megaman is a new character so I doubt they'll give him a rival, we got Palutena as a new comer too so a third from there might be a bit much, Fire Emblem we got 4 characters from so it's doubtful there as well, as for Marx... He's a personal favorite... I don't see much coming from Metroid because what's it going to be, SA-X? Dark Samus? I think it was mentioned that Ridley would be "returning" as a stage hazard, so unless they start doing some drastic weaves who could we get?)

So there were some leaks of the 3DS game going around last week (when hasn't there been?). It was taken with a truckload of salt, as is the norm.

Then a pile of videos matching the leaks came out on Youtube yesterday.

Then the videos were deleted.

People are arguing whether the videos could have been faked via Project:M, but the fact that they were deleted gives them the same credence as when Nintendo put a lid on the final form leaks for Pokemon X/Y last year, so...

On the one hand, the roster as per the leaks has some boring additions, not to mention presumably the videos "confirmed" that Ganondorf was going to be a Captain Falcon clone YET AGAIN.

On the other hand,

Spoiler:
Duck Hunt Dog and Bowser Jr. in the Clowncopter

have just the right touch of whimsy for the franchise (though

wasn't in the videos.)

So I'm not sure what to believe.

On happier news, my recently playing through Uprising is making me look forward to the return of the Fiend Cauldron for Classic Mode.

All I can think about is "Man, Sakurai is going to be pissed".

Shulk was one of the additions per the leak from earlier this week. I didn't get to see the leaked videos, but the people who did claimed he looked boring there, so dunno if he looks better in the trailer thanks to that sweet Xenoblade music.

So the game went out in Japan last week, pretty much confirming that leak from three weeks ago. I would like to say I'm disappointed, but that means we're getting two more new characters that fit greatly with Nintendo's sense of whimsy.

And... I'm not sure if spoiler rules still apply (KYM has stopped putting the unlockables behind the spoiler image), but whatever, the game still isn't out on this side of the Pacific:

Those guys who aren't officially revealed yet:
Duck Hunt is amazing. Making its moveset a tribute to all the light gun games of the NES is brilliant and I want to learn how to main it properly (partly because there's a whole generation of gamers who weren't around in the NES era and who need to learn to hate the dog).

I haven't seen a lot of videos with Bowser Jr. yet, but making the Koopalings his alts is great - and a nice source of jokes at the expense of people who wanted the Roy from Fire Emblem back.

As for the new/returning clones, I know there's been a lot of grousing about it (specifically, Edgy Pit), but then I recalled that one interview comment Sakurai made in the wait for Brawl, about how the time and resources for one unique character is the same as that for six clones. There are exactly six clones in this game. Would removing Lucina, Falco, Ganondorf, Toon Link, Dr. Mario and Dark Pit really be an acceptable price for bringing back frickin' Mewtwo?

Have been playing the demo. It controls fine so far, though for some reason picking random causes the computer to just stick you with whoever you had picked last. That, or the RNG really likes Megaman. Then again, Megaman is awesome, if tricky. And I don't know why his victory theme is a remix of his normal theme when he already has a perfectly recognizable victory theme in his own series.

In Short: HYPE GET. I've already preordered my 3DS copy and will probably buy or ask for Christmas the WiiU version. Which is coming out in the third week of November, by the way.

Which is great, since I had been cynically expecting it to come out in March the moment its release date was announced as Winter 2014. Hooray for lowered expectations?

I have the demo, but haven't had the chance to play it. Been watching gameplay on Maximillain Dood's channel, I've heard minor complaints about controls and "getting lost" if you have a smaller 3DS(that and Megaman is hella hard to use)

I'd say spoilers no longer apply here. Either way, I'm looking forward to playing Lucina, I wonder if her power is at the tip of her sword just like Marth, I hope so. Female Robin also looks fun. Palutena seems super fun and I will proceed to ship her with every girl. DHD will be good for laughs.

Either way, I'll be awaiting for the Wii release for a bought copy.

Megaman is hard to use. Mostly because his A is the peashooter, which has been nerfed to midrange. Most of my victories against the CPU have relied on smart item use and using his Up Smash, Down Smash and Air game. Also, Smash balls, because it's extremely satisfying to summon the other Megamen to blast the competition. "Fighting to save the world", indeed.

Another strike against the demo is that it doesn't let you change controls. Presumably the actual game lets you re-map things to something less annoying.

Oh, and Lucina has the power spread across her blade. I think Sakurai mentioned it on one of his Miiverse posts.

Found an interesting video from the nascent tournament play:

In Which Iggy (the player) shows off both Rosalina and Megaman, besting Aerolink's Sheik. Also, the commentators are surprised by what Iggy does with Megaman: using Rush Coil to escape combos, shooting the Metal Blade to the ground and then picking it up and throwing it, and the more well-known tactics of Smash attacks and air game. The Rosalina fight is also pretty good, if a bit overly reliant on ledge-hogging.

I want this as a poster 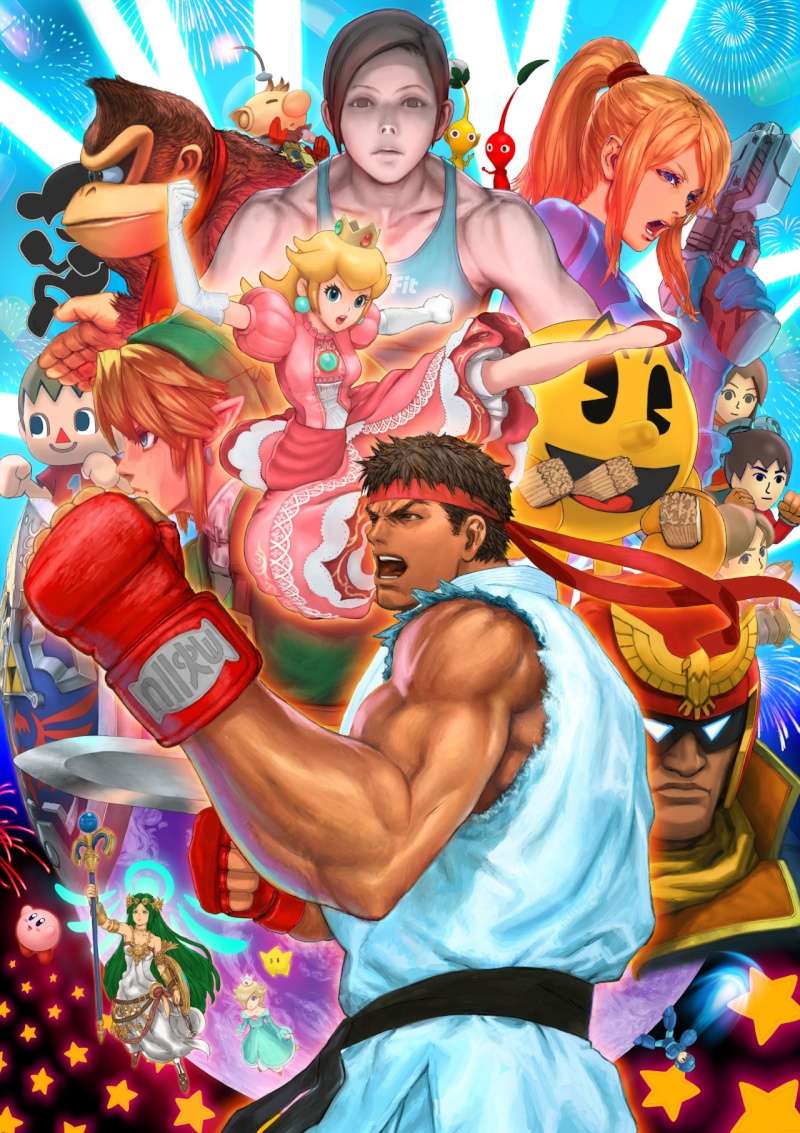 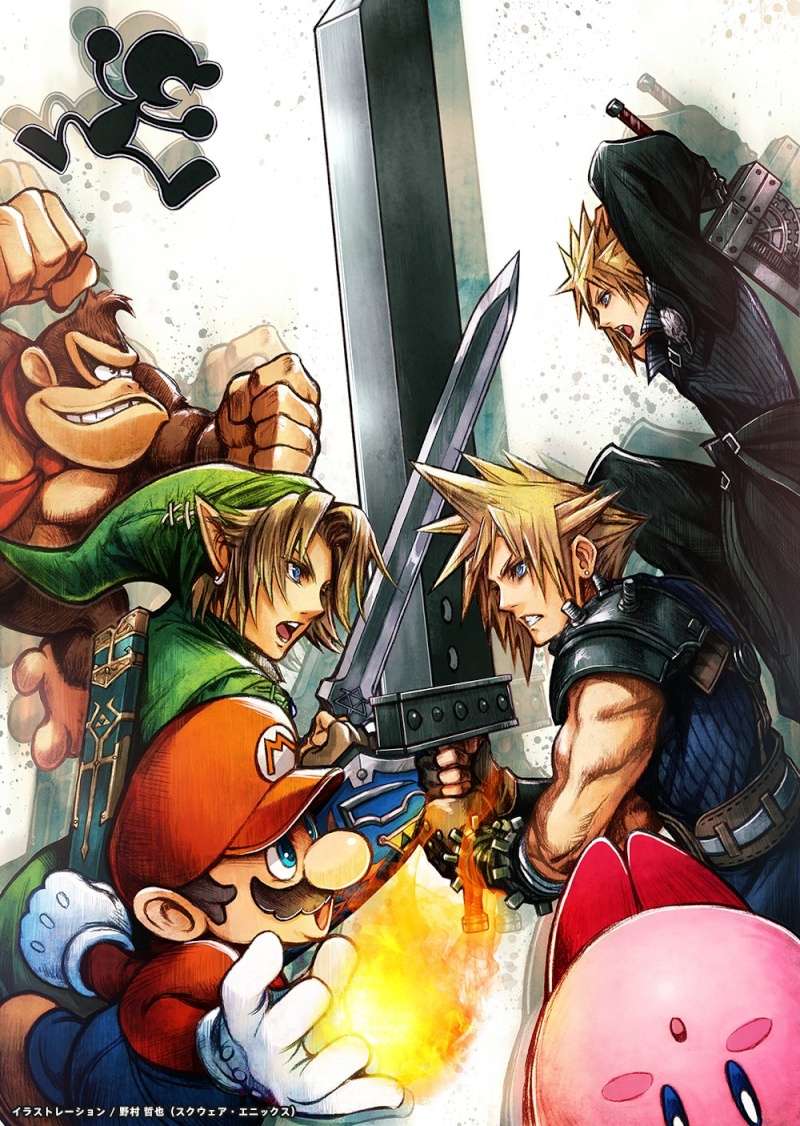 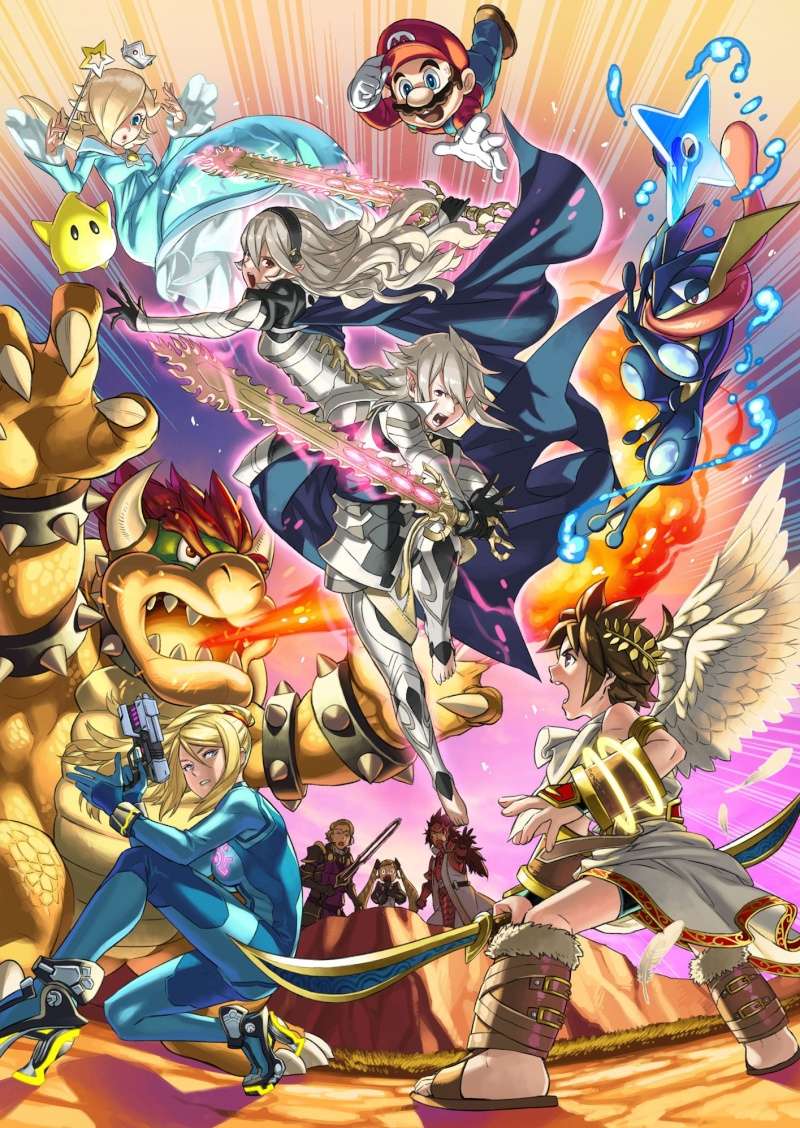 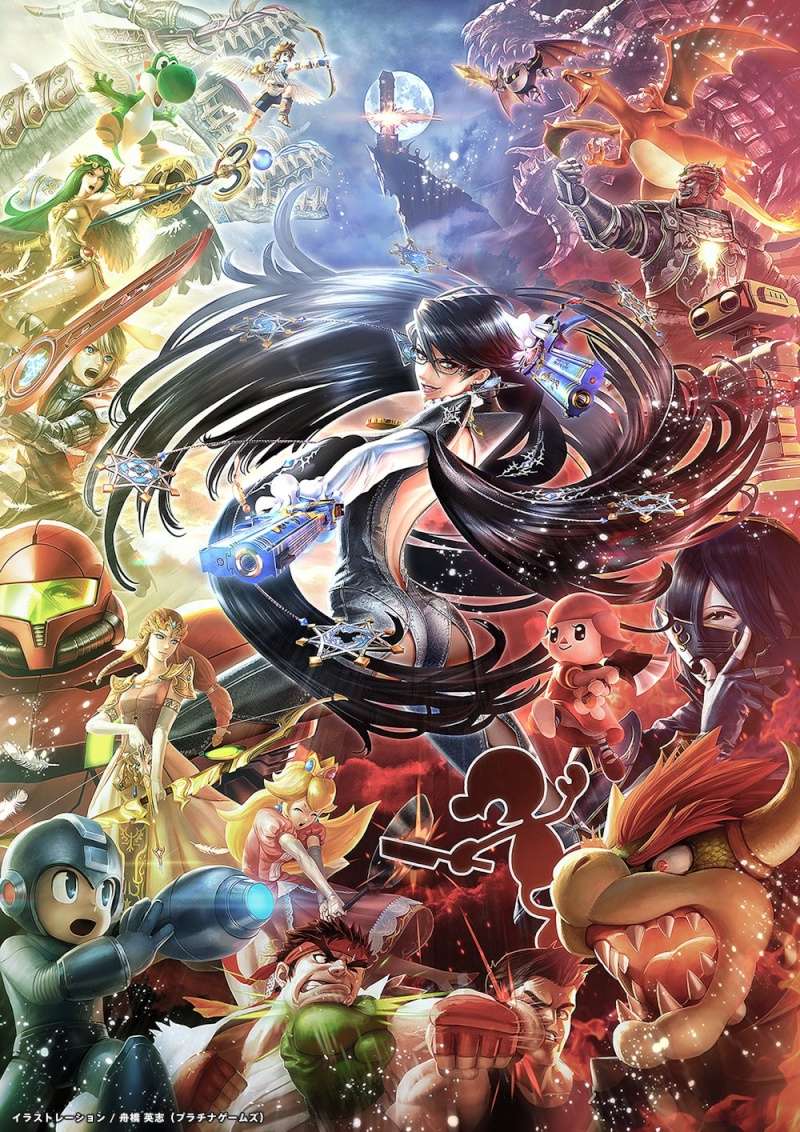