So, who are some the characters you would like to see, don't have to be group related of course(it can be though =) ), but just thinking of Nintendo characters and what has all been on their various platforms, no matter how slim the chance, just make some guesses or hopes.  Even if it's a returning character or a former assist trophy.  Speculate as much as you want on moves or ultimates, whatever, this is for fun.

Ok, first up, I feel Skull Kid(aka Majora's Mask) was a missed chance for a character.  Just imagine if his attacks were his transformations from his boss fight, and of course, his final smash being the moon drop.

Next up, Amazon Pandora ( http://kidicarus.wikia.com/wiki/Pandora_(Amazon) ), now there would be a fun fighter with heart attacks and would be a villainness for Pit.  I could see her having some fun heart moves and the like...  But I have a ill feeling it's going to be Dark Pit...  Another clone...

Next up, Ganondorf upgrade.  Don't get me wrong, Ganondorf is my main always, but he is just a slower more powerful version of Captain Falcon.  What I was thinking is Wind Waker Ganondorf( http://zelda.wikia.com/wiki/Ganondorf_(The_Wind_Waker) ), dual blades and everything, it would just be so cooooool!

To wrap it up for now, Lyn(aka Lyndis) from Fire Emblem ( http://fireemblem.wikia.com/wiki/Lyndis ).  It would just be so epic to be able to play her!  And her ultimate could make her go to her Blade Lord form and that would be SO HYPE!

One thing I have heard is that apparently they're using a "Costumes" mechanic to group character variants together somewhat - with the twit being different costumes can actually play somewhat differently. Hard to say how far that'll go (if nothing else Luigi won't likely be reduced to a Mario costume).

I could see that happening, and it would be kinda cool just as long as it doesn't take away too much from developing new characters, if that makes sense.

But yeah, Mario would have Dr. Mario, Fox would have Falco and Wolf, and Captain Falcon will have Ocarina Ganondorf.

That could also open up Samus for Dark Samus and/or SA-X come to think about it...

Someone in another forum suggested that Ganondorf should filch Ike's moveset for the next game, since it's not like Ike's coming back.

And fun as it would be to play as Tharja, Lucina's more likely to get in... unless she's a "costume" for Marth.

Also: Groose and his Groosenator as an assist trophy

Ganondork with Ike's moveset... that could be pretty badass and give a him a chance to show off that huge broad sword with with curved head that he has never used once(unless he does so in Twilight Princess or Skyward Sword...).  I remember he flaunting it about and going "THAT SWORD IS SO COOOOOOL!!!!", hehehe.

Yeah, I was kinda under the impression that Lucina could be a costume for Marth

Spoiler:
given the fact that she pretends to be him early in FE:Awakening

I'm actually kind of surprised how much I like the idea for "costumes", Daisy and Shadow Queen Peach could be alternatives for the Princess(be sick awesome if Shadow Queen made it in).  With the new Mairo game I could even see Rosalina getting in on the action, though I would kind of like her to be her own character...  Let's see, we haven't seen anyone from Advance Wars, that be a cool edition.

I really like how Brawl introduced villains, because as a villain lover, getting to play as Ganondorf and Bowser was so freaking awesome.

I love being right sometimes.  Interesting  battle system for this one =)

Merry Christmas and happy ZELDA IN SMASH!  It's not much of a surprise, but what is surprising is not seeing Shiek, instead we see the armored suit from Spirit Tracks acting as Zelda's Persona/Stand.
http://www.siliconera.com/2013/12/25/zelda-joins-new-super-smash-bros-3ds-wii-u/

It could still be there, but to be completely honest, I wouldn't miss it that much.  I mean, Shiek was fun, good at racking up quick damage, but not powerful, so you would have to switch between the two a lot, which wasn't something I could really get into(I did really like Zelda's critical kick though).  Now, if that concept was moved over to another character, like say, Skyward Sword's Impa, that could be something, hehehehe.  Sorry, just some random thoughts.

Also, this image totally looks like Rosalina is marionetteing Zelda with her magic =) 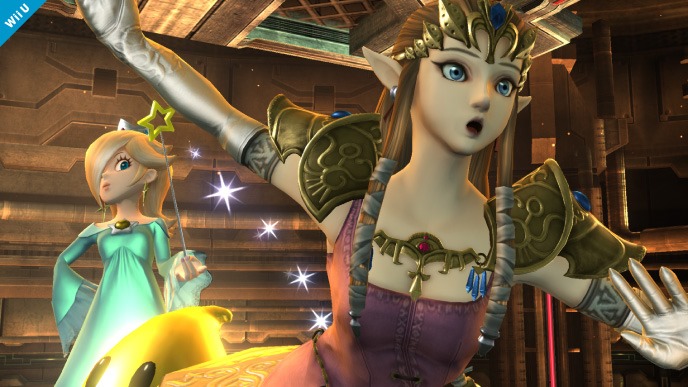 I really should take some time a caption that pic...

Oh, and you probably already know about stages that will be different for each version, but the trophies will be too, interesting~ http://www.siliconera.com/2014/01/06/super-smash-bros-3ds-wii-u-will-feature-different-trophies/

It's probably just the regular trophies given the example, but I suppose assist trophies may be a possibility.

But yeah, trophy collecting was always a fun little hobby for me.  But yeah, I wonder what easter eggs will be in the newest set of trophies.  http://didyouknowgaming.com/tagged/super-smash-bros

Nothing much today, just a pic collection of screenshots released thus far.
http://www.siliconera.com/2014/01/14/touching-tale-super-smash-bros/
The little pic story with Link cheating on Zelda with Peach is amusing.

Or, you know, they could do a sudden update that I somehow missed about Ashley from WarioWare(s) is gonna be a assist trophy
http://www.siliconera.com/2014/01/16/ashley-warioware-assist-trophy-super-smash-bros/

My thought from looking at the first screenshot from that Siliconera link:

It doesn't work on Marth, because he's just too fabulous to be charmed.

Dedede has strongest side smash so far
http://www.siliconera.com/2014/01/20/king-dedede-one-strongest-side-attacks-smash-bros/

AN OLD VETERAN APPROACHES! LUCARIO! Also one of his screenshots shows him, Mario and Megaman fighting the Yellow Devil.

Hornofdesolation wrote:AN OLD VETERAN APPROACHES! LUCARIO! Also one of his screenshots shows him, Mario and Megaman fighting the Yellow Devil.

I already knew about Palkia from Crunchyroll but I didn't know that Mother Brain is going to be an Assist Trophy.

Hornofdesolation wrote:I already knew about Palkia from Crunchyroll but I didn't know that Mother Brain is going to be an Assist Trophy.

Confirmed for New Smash-
Chasing down n***as that steal bikes.