Well, here's hoping this thread does what I hope it'll do for me. For a while now, I've had issues with motivation for writing, both for fanfics and original work. So I decided that laying out some ideas and an itinerary for what I need to do (sort of like what Rainday is doing) might actually help me sit down and write. Thanks to Rainday for giving me an idea as to how to tackle this, rather than just sit and moan.

1) Chapter 2 of Ennui of Morrigan Aensland. I've got a few different fighters to choose from: Mai Shiranui, Cammy, Chun-Li, and Sophitia are ones that I've considered so far, but I'd like some more ideas for potential opponents/victims. In addition, what parts they could play for both Morrigan's personal harem as well as rebuilding her castle. The possibility of doubling as staff/lovers is what I'd like to focus on here, but other ideas are welcome.

2) That side fic to the Cloud...ia? fic I did a few years ago. Tifa and Aeris are separated from Cloud during the Don Corneo confrontation if you dressed Cloud up correctly, so I figured the two ladies would try fighting their way to Cloud before falling into a trap involving honey. You can probably see where this leads.

3) There was a Sailor Moon fic I was supposed to do for Ricobanderas9, but I completely forgot the specifics as to what he wanted. I know he's Admin on here, so it would be preferable to chat with him through a personal message or IM, before I put up the finer points up here to remind myself.

4) I told Rainday that I'd pick up that Morrigan/Tifa and Aerith idea to do a fic on. Although its being worked on by another through that 3D Girl program, I'd like to know if he's still okay with me doing a fic, because I'm not sure if he's just going to stick with the 3D Girl captions that are planned.

5) I've actually had a couple of ideas pop up with Estelle from Tales of Vesperia and Tear and Natalia from Abyss. These are separate ideas, of course. And don't ask about plans for Xilia; I don't have a PS3. T.T

Other than all that, I've been busy playing through Fallout 3 again. I'll probably pick up where I left off in Revengeance, though I'd have to set aside some money to get the Jetstream DLC. Also been playing a lot of Pokemon Black 2, focusing on breeding and filling out the National Dex. If anyone wants to trade from White 2 or Black, let me know. Also, Vanillaware is apparently re-releasing Muramasa: the Demon Blade on the Vita, with cleaned up graphics and additional characters. Goddamnit Sony, I'm not made of money. You tempt me with Xilia, Neptunia mk2, and some other exclusives, and now try to bring my attention back to the Vita with a game I love.

I've also started watching Freezing, Sengen Kagura, Magi, and Tenchi Muyo: War on Geminar. So far, I'm liking what I'm seeing. Anyway, feel free to add comments and ideas: the whole point of this is to get me out of procrastination and whatever funk is interfering with getting some writing done.

DrgnmastrAlex wrote:4) I told Rainday that I'd pick up that Morrigan/Tifa and Aerith idea to do a fic on. Although its being worked on by another through that 3D Girl program, I'd like to know if he's still okay with me doing a fic, because I'm not sure if he's just going to stick with the 3D Girl captions that are planned.

I probably won't even start on it for a while, and as I said there, my idea goes pretty far from the general description originally posted, and, to put it selfishly, probably serves to suit my interests more than others. You should go ahead, since I'm thinking what you might write up will stick more to Rainday's description.

Ah, okay. I'll still wait on Rainday's response if he decides to post it here. I do look forward to how you'll take it, though. ^^

Hm? Oh, yeah, it's fine dood. You don't need to worry about stuff like that. Again, that thread is meant to pretty much influence other people and get these ideas out of my head =)

Alright. I'll take care of that fic first, then, and it'll get posted up here so I can get some points accrued. Any "Ennui of Morrigan", as well as the Tifa/Aerith fic with the honey trap, however, you'll have to go to my dA profile to read, since I told a few who follow my account I'd do so.

Thread Necro, engage!  Some more Fate/Grand Order news, though I didn't think it'd be appropriate for the sighting thread.  So I'm sticking it here.

F/GO announced a few days ago for players to "ready their Sabers", and provided a Half AP Cost event for Experience Dailies through the 20th.  They just announced the reason why on their main website. 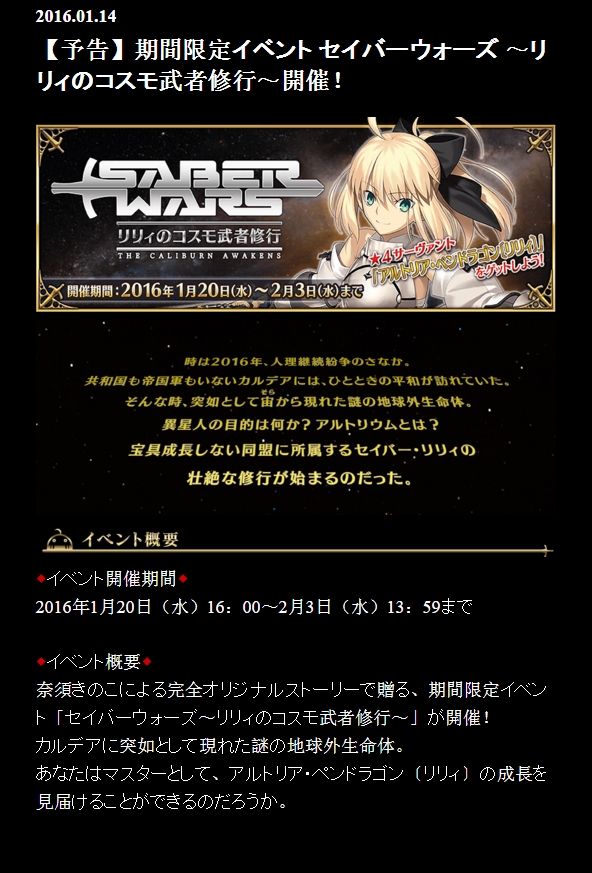 THERE WE GO.  So yeah, apparently they wrote up a scenario for F/GO where Saber Lily Arturia learns from other Saber-class Servants in order to upgrade her Noble Phantasm (she was a special release, and you could only get her through a code.  This event will allow players who didn't get codes to get her as an event reward, and possibly reward those who already have her with a Noble Phantasm upgrade.  Her stats are kind of meh, so I'm hoping this event fixes that for all players participating).

Considering that Saber Lily Arturia is supposed to be a younger version of Arturia who just obtained her blade, and the fact that this is playing off of Star Wars, we'll probably see some jokes and interactions between Saber Lily, normal Arturia, and Alter Arturia.  Just thought I'd mention this, since it's more satirical than sexy.  Still, Alter Arturia "training" Saber Lily would be right up our alley, especially along the lines of a light side hopeful being seduced by the dark side.

Interesting bit of news, and it be fine if you want to put it in that thread because it's relevant to the game.  After the sighting is written you can feel free to discuss about what the games about dood =)