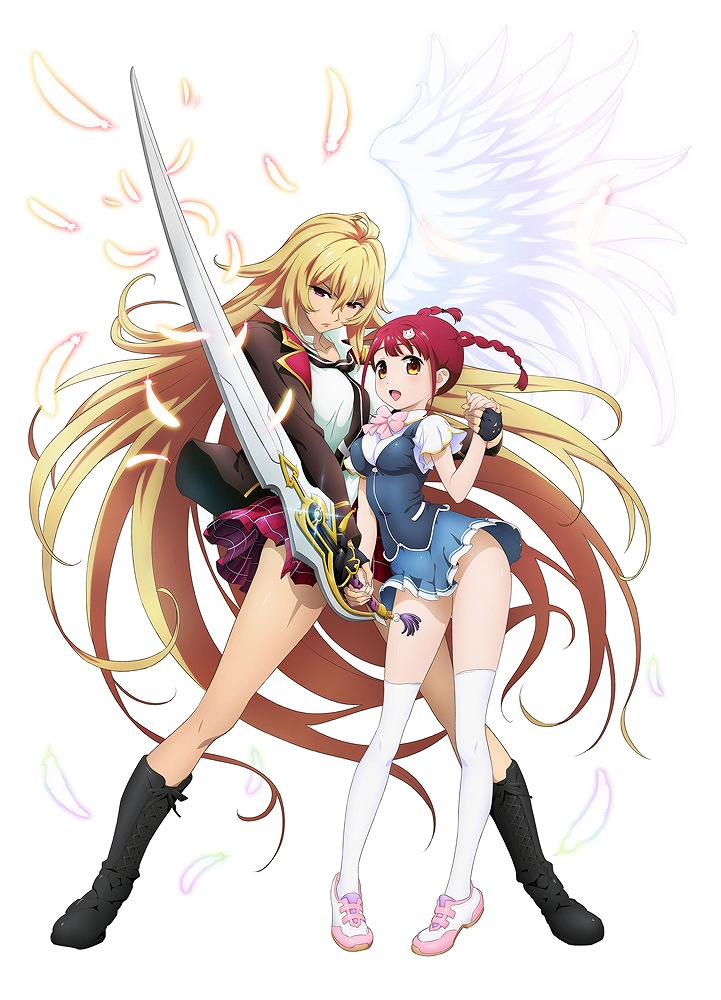 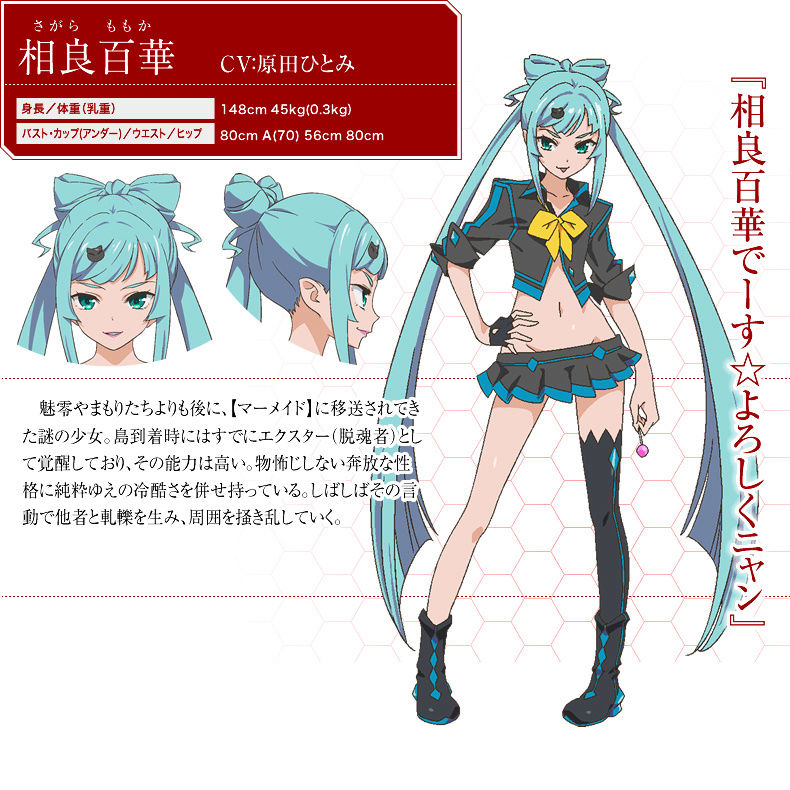 Summary: Valkyrie Drive revolves around girls that contract a virus that either turns it's victims into powerful weapons when they become "sexal aroused"(though most of the time it seems like when they orgasm) called Exters(bassically submissive girls), or those that can power and thus wield them called Liberator Arms(who are more dominate girls), and are thus imprisoned on special islands so yeah, yuri-tastic.

Fast forward to near the end where Momoka is finally introduce. She poses as a childish super cutesy little sister type that slightly spoiled, but in reality she's a very manipulative and villainous secret agent A3. She is sent to the island to find a virus infected girl with a high scyro rate to become the ultimate weapon to take control of the world. Momoka is also a bioengineered Exter, giving her a lot more power, and breaks the mold by actually being a dominate one.  She can even merge with her wielder, turning them into battery. 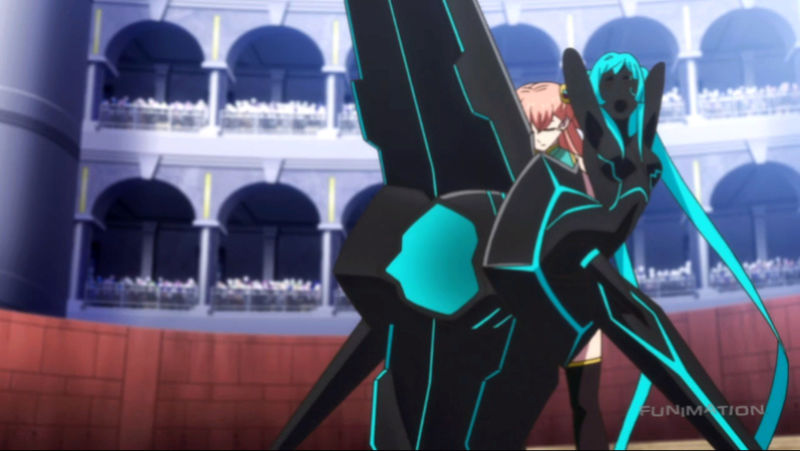 However, that's not all, she and her comrades, D5(a well endowed blond dark skinned girl with glasses) and E9(a chubby girl with pigtails)  actually have gone rouge and plan to use the power to benefit themselves, but mostly Momoka. 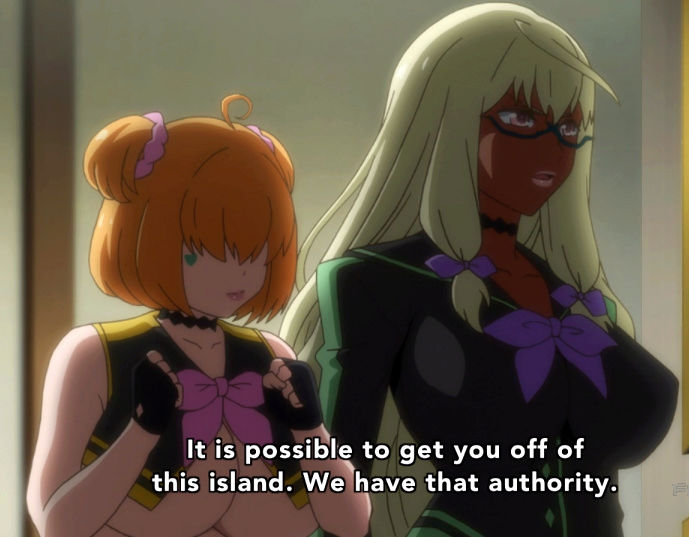 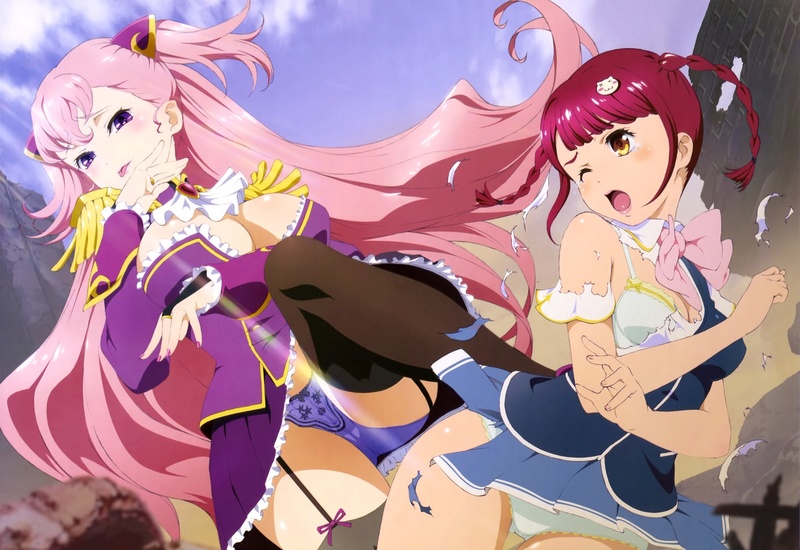 into staging a cue that gives her the power and control she's always wanted, allowing Momoka to do as she pleases.  This allows her to have Charlotte round up all the girls on the island so she, D5, and E9 can "test" them. 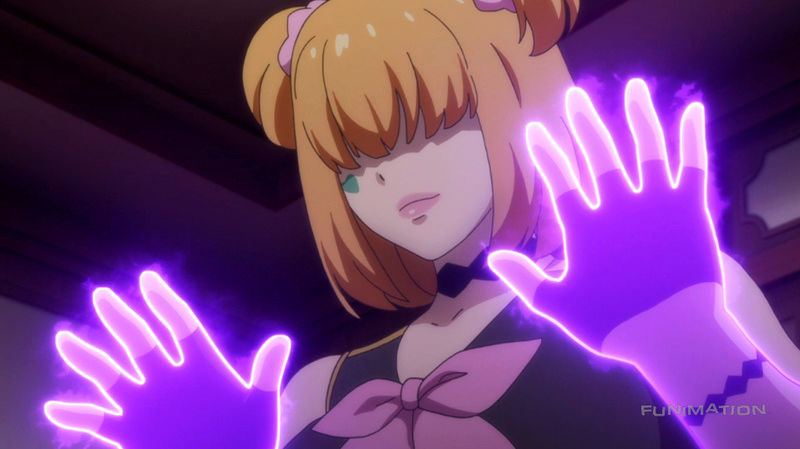 However they end up finding the one they are looking for through happenstance who turns out to be one of the main heroines, Mamori, who Momoka and D5 proceeds to take away from other main heroine, Mirei. 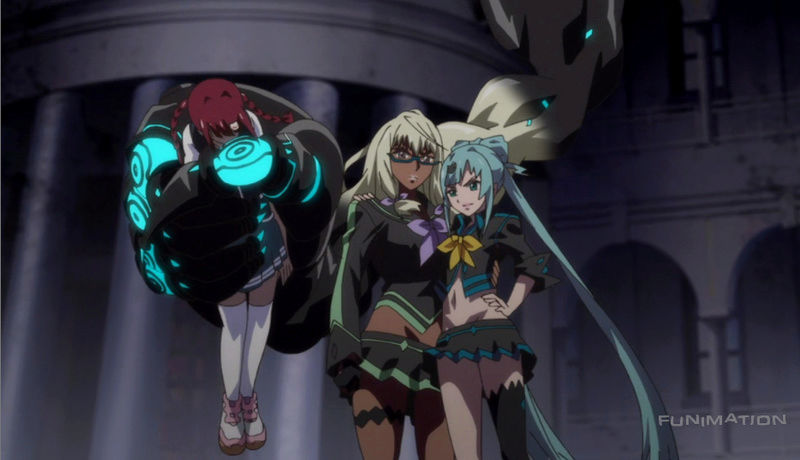 Charlotte tries to question her but gets slapped and told to obey if she wants to get off the island.

NOW, for when it really starts to get relevant.  But before that, I will have to be using links exclusively from Funimation which only has the (annoying light) censored version...  There is hope that a DVD/Bluray boxset will eventually be released, and when that happens it should be uncensored on the site by then, but if you can't wait that long or live in a country where it's unlicensed, I'm sure there's someplace you can find them.  That said please support the official release/anime in anyway you can.

Momoka proceeds to "take her life back" with Mamori
Episode 11
Times: 15:00-17:07
http://www.funimation.com/shows/valkyrie-drive-mermaid/videos/official/soldier-arm (censored broadcast)
and here's a little taste of the uncensored for everyone
http://danbooru.donmai.us/posts/2217877?tags=sagara_momoka

The results, Mamori willingly making out with Momoka(it's more her breaking her mind with pleasure and thus enslaving her body to that same pleasure if you want to get technical about it)
21:55-22:40 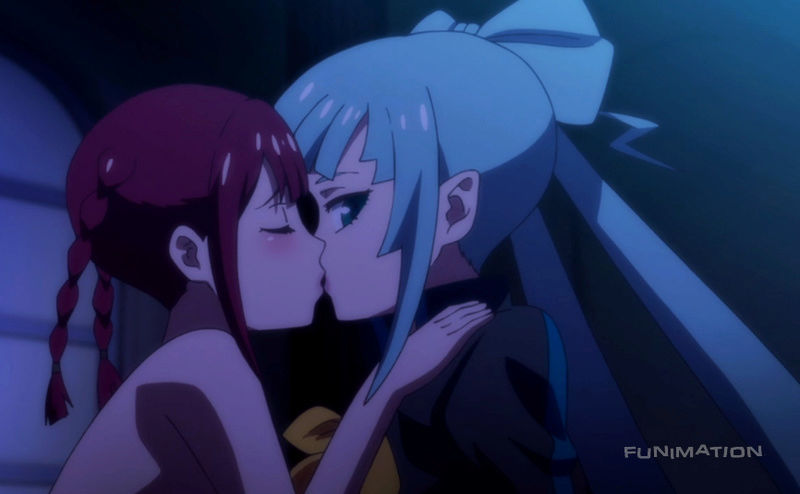 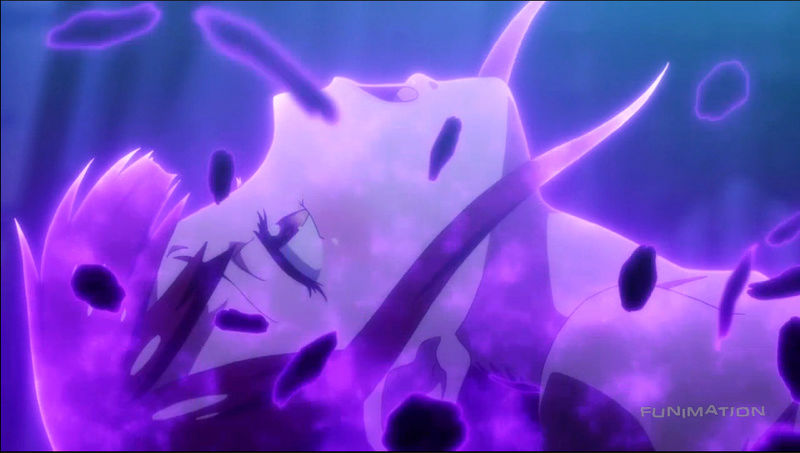 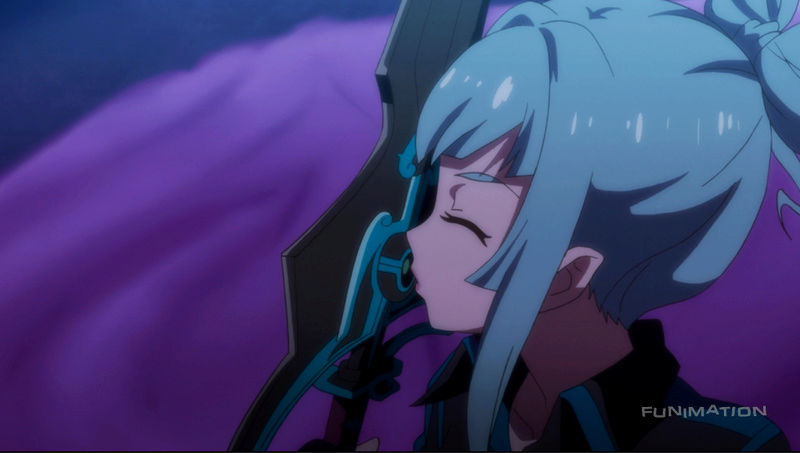 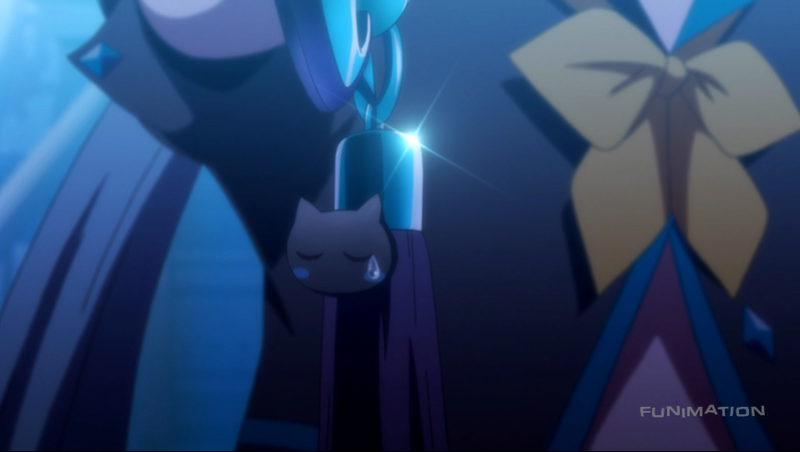 Episode 12
http://www.funimation.com/shows/valkyrie-drive-mermaid/videos/official/valkyrie-drive
Mamori's true power once corrupted, mind control and absorption of those with the virus(the MC only seems to work on the low leveled)
6:04-13:05
The heroines get absorbed into Mamori, and what it's like within the blade(a tentacle filled womb that constantly keeps them in pleasure while it sucks the virus out of them forever), and BAD END COMPLETE
9:23:11:28 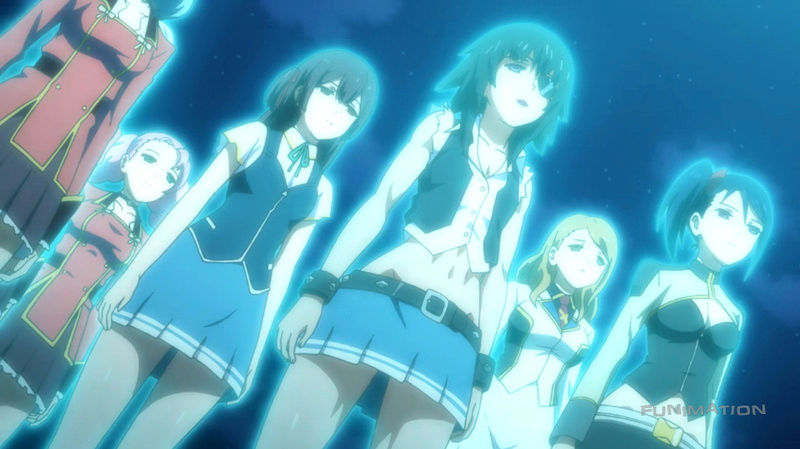 It's also worth noting that after the absorbing Mamori(blade form) changes into a more corrupt looking sword with each. 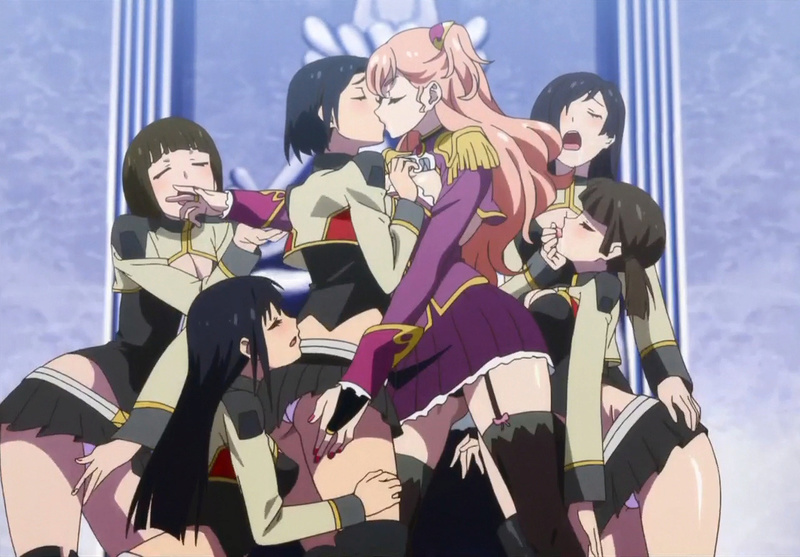 Lastly, I will offer this bit of warning about one negative thing that brought this show down for me:
While this show is pretty good yuri stuff, there is a misstep in episode 4.  One of the girls has a arm that can use hypnosis... however it's used to create a standard h doujin way...  It hypnotizes Mirei into thinking she is being rapped by a bunch of muscular faceless men... which is really disappointing and hurt the series for me.  It ties into Mirei's and Momoka's backstory though... So I guess it's not too egregious... *sigh*

Last edited by Rainday on Mon Sep 05, 2016 7:06 pm; edited 1 time in total
_________________
AKA Allan, lurker3009, Swacorpse, current acting moderator of forum/group, feel free to contact me with any questions
Where I find and source pics.
http://swacorpse.deviantart.com/ , http://www.pixiv.net/member.php?id=976522
http://raindayofmay.tumblr.com/ , http://www.hentai-foundry.com/user/Rainday/profile
https://groups.yahoo.com/neo/groups/charmed_by_hypnosis_haven/info

Ok, I was kinda caught up in it last night that I forgot to add pics of the actual scenes, so I fixed that, as well as changed the first pic to show what Mamori looks like in her arm form so you can better see the contrast when she gets corrupted. Also listed how Momoka controls the castle guard which I forgot to do.
_________________
AKA Allan, lurker3009, Swacorpse, current acting moderator of forum/group, feel free to contact me with any questions
Where I find and source pics.
http://swacorpse.deviantart.com/ , http://www.pixiv.net/member.php?id=976522
http://raindayofmay.tumblr.com/ , http://www.hentai-foundry.com/user/Rainday/profile
https://groups.yahoo.com/neo/groups/charmed_by_hypnosis_haven/info