Now, I am not sure if a somewhat willing conversion counts, but I feel like at least pointing out that it exists is the least one can do.

In Elsword, a 2.5D free-to-play beatemup, classes are chosen by the character you control, and one of those is Elesis, a close range brawler. After completing the "Free Knight" quest chain, one can choose one of three jobs, and one of those is becoming a "Ruthless defender of the innocent." As per the description:
"Wally is using the power of the Elshard and the Nasods to oppress the people of Elder. To stop this, Elesis confronts Wally, warning him to stop his wrongdoings. However, he refuses to listen, and continues his dictatorship. Elesis becomes hesitant, she's unsure of what to do, until Luichel comes to give her advice."You can't always stop villains by just being righteous! Sometimes you have to be willing to use brute force!With the guidance of Luichel, Elesis starts to defeat Wally's minions while destroying various parts of his castle through the use of brute force. While doing this, Elesis begins to realizes that the righteous way that she upheld before isn't the only way to exact retribution.
To uphold her new meaning of justice, Elesis decides to become a Dark Knight, who operates in the darkness to defeat villains. "

The result of Elesis abandoing her morals of a fair and honest fight is quite lovely, and she gaines two years as well (18 years old).

As an added bonus, after lvl 35, Elisis's dark power is in full effect, and she becomes a beseker who uses her own HP (a must for an evil lady) to deal massive damage, as The Crimson Avenger. 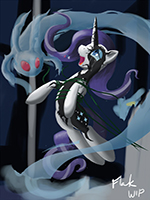 Totally counts dood =) Self corruption is a great thing(though it doesn't hurt that she was edged on this path by another girl, who was an "ex"-thief).

Rather lovely set, I had seen bits and pieces on 2chan, but could never make sense of it, so yeah 15 points! You can see such a drastic change between them, but still tell that it's the same character, and wow does she continue to get sexier, just perfect =)
_________________
AKA Allan, lurker3009, Swacorpse, current acting moderator of forum/group, feel free to contact me with any questions
Where I find and source pics.
http://swacorpse.deviantart.com/ , http://www.pixiv.net/member.php?id=976522
http://raindayofmay.tumblr.com/ , http://www.hentai-foundry.com/user/Rainday/profile
https://groups.yahoo.com/neo/groups/charmed_by_hypnosis_haven/info