The Photographer Has Been Encountered! Without her photo album to house her collection, the Photographer must discard one of her currently owned photos if she wishes to add a new one to her collection. A Matter of Time:

1) Quickcast is abolished in order to preserve game balance until further review of its power. Players should choose another passive in its place before the Battle opens.


The Photographer Abilites - Clarifications and changes:

1) Picture Perfect: The size and composition of The photographer's starting collection of photos has been decided before the Battle was first announced. Its contents will only be revealed to players whose characters have been targeted by the Fetish Dealer ability.

2) Fetish Dealer: Characters who become Immobilized and unable to act due by this ability will regain the ability to move and act normally should their Charmed count be reduced to less than half their Willpower score.

3) Work it, Girl!: A heroine affected by this ability becomes Tranced, and can be awakened using the normal methods (physical attacks or the 'Slap' unique action).

4) Smile for the Camera: Summoning an entity from a photo causes this ability to go into cooldown, as does trapping an entity into a photo. In either case, any character facing the Photographer becomes Immobilized until the end of their next turn as they are stunned by the spillover of her camera's soul sucking flash.

Here's an idea I've been toying with for a while now. As they prepare for the Battle, players may choose to equip their character with a number of Tools that may make their lives a little easier down the line. The guidelines for doing so are as follows:

List of available Tools:
Auto-Crossbow: Character deals damage at range, dealing 4% of 200 for every square between them and their target, character must be on the same row or column as their target. Every Character on the line between the user and the intended target will take damage as though they were the intended target.
Flamethrower: Targets within a two squares long cone from the user take 25 points of Fire damage
Bio Blaster: Targets inside a 3X3 square centered up to 2 squares away from the user take 10 points of Poison damage, and are inflicted with Poison.
Hypno-Gun: The nearest target on a line up to 4 squares long (vertical, horizontal, or diagonal) is inflicted with Sleep (70% chance to succeed).
Noiseblaster: All targets within a 5X5 square centered around the user (user excepted) have 50% chance of becoming inflicted with Confusion until the end of their next turn.
Chainsaw: Deals 20 points of physical damage to all targets in melee range.

In the last update to the game, Embrace has been removed from the unique actions list. Personally, I think that's a shame, as I'm rather fond of the concept, so I'm bringing it back.

Alright, I think I'll enter Blaine for this one.

Alright, Sein, Blaine, and Damon has been added to the board... Also, this might be our first Battle with more Heroes than Heroines taking the field... How novel. ^^ 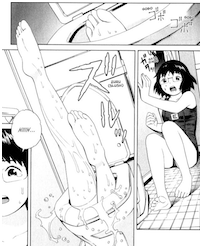 Alright, Rei-Ginsei joins the party... but this is still not quite enough to make the Photographer work up a proper sweat. Anyone else want to join?
And if no other players are interested, do any of the current participants wish to enter a second character into the fight?

Rdishon wrote:And if no other players are interested, do any of the current participants wish to enter a second character into the fight?

Mink and Aki have been added to the list. (A shame, I was hoping to have Aki in the photo collection... Oh well, I guess I'll just have to work for it

I think that's enough people, but I'll take in one more if anyone shows interest in the next couple of days. I need a little time to prepare the game assets anyway... ^^~

Rdishon wrote:(A shame, I was hoping to have Aki in the photo collection... Oh well, I guess I'll just have to work for it

Huh, this kinda peaked my curiousity.

Don't mind if I change my player character from Aki to Angela instead? Same tool choice as before.

I doubt it'll be all that exciting, but sure, I'll switch them out.

Alright, let's get this show on the road.

It's been a strange couple of months. Recurring reports of Monster-Girls appearing in the very heart of the city, somehow bypassing every single one of its alarms, wards, and defenses only to disappear without a trace before any response team could be mobilized have had the various Agencies and Hunting Guilds scrambling for solutions and grasping at straws. With every case of disappearance, soliciting, and public indecency being the possible handiwork of the supposed monsters, the search for the cause had become rather like the search for a needle in the proverbial haystack.

Finally, though, a lead presented itself.

'Camera Obscura', A newly opened modeling agency experiencing a meteoric rise to prominence, situated in the heart of the city's commercial district, and the rumored center of a vast portion of the city's flesh trade. More to the point, though, it is the last known whereabouts of an entire team of Hunters tasked with searching that area of the city for any clues to the source of the recent sightings.

You enter, alert and on edge, and armed to the teeth. The receptionist, perfectly groomed and smiling brightly, offers to lead you to the person in charge. You are not fooled, though. A quick blast from Mink's hypno-gun puts her to sleep and a liberal application of duct tape leaves you all free to search the place unsupervised... only to find a whole lot of nothing. Nothing, that is, until you enter one of the agency's studios, a large empty space where a lone woman stands waiting for you, a cocky grin on her face.

"You know," she says, smirking, "if you'd just let her show you the way here, we'd be done with this audition already."

"You are the one in charge?" one of you ask, suspicious. She does not seem like the business type.

"Well, I do own the Camera." she answers lightly, lifting what appears to be an old Polaroid camera for you to see, a smile on her face of one who's told that very joke many times before, and expects to keep doing so many times more, "And have a great head for figures..." her voice drops into a seductive purr, "Now, why don't you show me what you got, loves, and we'll all see what position you're most suited for?"

OOC can only see one person on the map (h2) am I doing something wrong?

twicemartyred wrote:OOC can only see one person on the map (h2) am I doing something wrong?

Probably, but I've no idea what that something could be. Here is a link to the map as it should look at the moment. Hopefully this works, and by the time your turn rolls by again, you'll figure this out...

Placeholder name. You don't know what the actual effect is yet, or what's causing it.

Placeholder name. You don't know what the actual effect is yet, or what's causing it.

I do now. Oooooh boy.

"Hey there, if you're looking for models so badly, why don't you start with me? Just pay no attention to all my friends who's getting ready to pummel you, yeah, that's it."

>Angela uses Flirt on the Photographer!

"And if I turn away, no way that camera's gonna affect me, hee hee"

>Angela uses X-Ability to Turn Away!

>Angela turns away from the Photographer.

"Hey there, if you're looking for models so badly, why don't you start with me?" Angela teases, winking playfully at her enemy and striking a seductive pose for her, "Just pay no attention to all my friends who's getting ready to pummel you, yeah, that's it." The young heroine adds under her breath, still smiling as she turns around to show off every inch of her toned body, knowing the photographer would not be able to resist such a lure, "And if I turn away, no way that camera's gonna affect me, hee hee..."

"Oh, that is very nice..." The Photographer all but purrs, her voice pouring like honey into Angela's ears, the genuine pleasure in her tone spreading an unfamiliar warmth in the young heroine's heart as she hears the villainess moving around her, looking for the very best angle, "Go on, show me more, baby!" the camerawoman calls excitedly, and, lost in the moment, Angela wants nothing more than to comply.

-Under the effect of Flirt, the Photographer will target Angela during this turn.
-

>The Photographer moves 4 spaces to the right.

Blaine observes the opening moves of the battle carefully. It was clear the girl, although she didn't look like a monster, possessed extensive strength and magic. However, she seemed fairly slow, and if past experiences had taught him anything, it was that magic was always best used at a safe distance. To that end, he moves to a position which makes the most of his advantage, and quickly slings a bolt of frost at the camera-wielding lady, while muttering under his breath: "I hate ice magic."

>Blaine moves 3 spaces to the right.