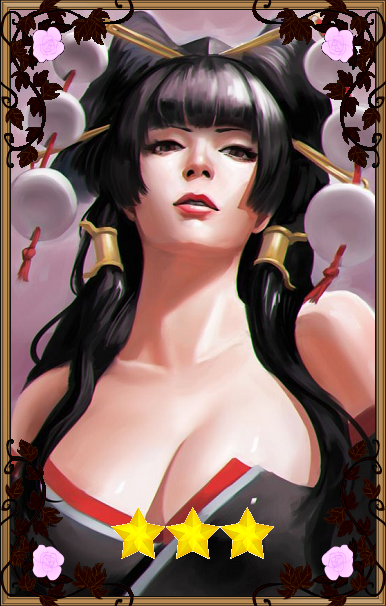 (Use to deal 20 Wind Damage to a target in a 3 square radius. Reusable. Only one character may hold onto the fan at a time and it is returned to Nyotengu on KO/Enslavement/Conversion.) 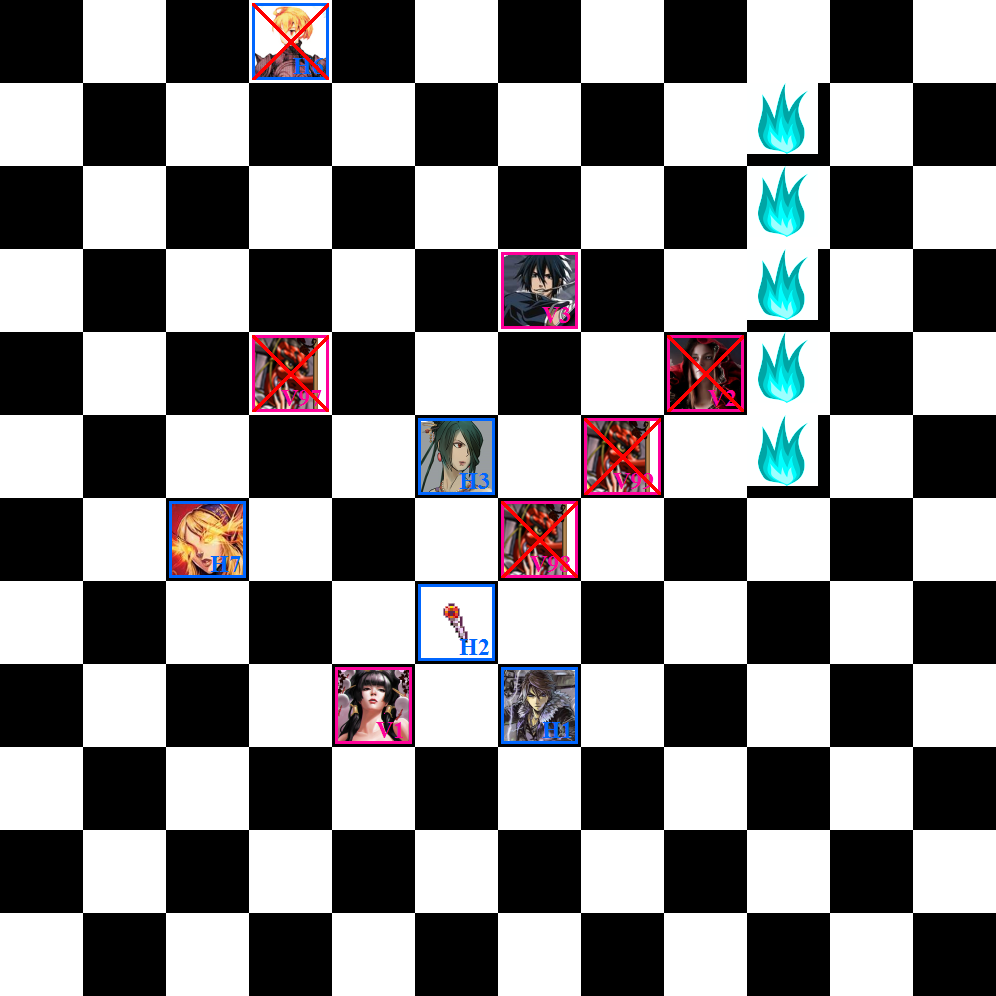 Nyotengu Tweak:
Nyotengu is Weak to Wind attacks (1.5x multiplier).
School Student costume takes effect whenever any Wind attack (including Enchant or the Steal item) is used by a Hero/Heroine.

Revamped Speed Formula:
As my previous battles, a Speed Formula that slightly lessens the gap between high and low speed characters and avoids clumping of turns.

Sleeper Agent:
This game variant will go into effect if there are more than 5 Hero/Heroines participating.
One of the Hero/Heroines, randomly chosen when the battle begins, will be revealed to be a traitor, automatically becoming Enslaved/Converted.

They are afflicted with the "Awakening" status - During the first three ROUNDS, damage taken is reduced by 50%, but they also gain a 50% chance to miss any action.

The main monstergirl stats will be reduced in order to compensate for receiving additional help.

"My name is Warren. I am a great Seer who can understand the destiny the stars have placed upon you.
I will now offer you the power of the Tarot to help in the coming battle.
However, it comes at a great price..."

Tarot Rules:
- Spend 50 of any stat except Stamina (applies to this battle) in order to draw a Tarot from the Deck!
- You must draw your cards during Registration Phrase
- You're allowed to draw multiple cards... if you can afford the cost.
- Tarots are single-use items (and thus affected by any Item related abilities) that can be used for great effect.
Current Cards Drawn:

Strength: (Drawn by Ramza at the cost of 50 Strength)
User gains +100 Strength for his next 3 Turns.

Magician: (Drawn by Lulu at the cost of 50 Speed)
Lays down a Wall of Fire 5 squares long, dealing 10% of Magic as magic damage to anyone on that square at the start of their turn, and to anyone who passes over that square whilst moving. The magical flames burns only Monstergirls and their allies.

@065227n if you message me with what you want Nyotengu to be resistant/ immune too elements & resistance wise i will update her before the battle begins! Also i'd like to join but i wanna tweak my Hero first so reserve a spot for me!

Lady Malboro wrote:@065227n if you message me with what you want Nyotengu to be resistant/ immune too elements & resistance wise i will update her before the battle begins!

Just a weakness to wind, that's all for now.

Might i also suggest you check out the new black, white and chaos magic spellbook i changed it recently to add the effects from the custom book onto most spells and balanced afew in the process.

I wouldn't mind joining. Might give me a good chance to see how well Squall has been made.

065227n wrote: Jump/Guard Patch:
You may not use Jump and Guard on consecutive turns - there must be at least 1 turn in between using these actions.

Joining with Lulu, of course.  Should be entertaining.  :3

Also, can I get a link to the list of Tarot cards? I don't know where to look.

As mentioned in the General Discussion, Nyotengu doesn't have any attacks that can penetrate Guard (which as far as I can tell, are attacks that directly inflict Conditions such as Trance / Hypnotize), so constantly repeating Jump/Guard will make you invincible.

With this patch, it's down 2 out of 3 turns, which I think is still pretty good.

DrgnmastrAlex wrote:Also, can I get a link to the list of Tarot cards?  I don't know where to look.

There's no list - I want them to be a surprise.

As mentioned in the General Discussion, Nyotengu doesn't have any attacks that can penetrate Guard (which as far as I can tell, are attacks that directly inflict Conditions such as Trance / Hypnotize)...

Actually it's it abilities that have miscellaneous effects and/or induce states (not conditions). If I'm reading this right, in Nyotengu's case that would mean that a Gueading character would still:

Took a look at Lulu's HP last night to see if it'd be worth getting a Tarot card.

I think I'll offer up Astrid for this battle, since Blaine is having far too much fun elsewhere right now.

Since no one seems to be biting on a tarot card, the cost for this battle has been changed - now you can spend 50 of any stat except Stamina to draw a card, so long as your max HP remains below (250 - (number of cards drawn * 50)).

I've just finished updating the Nyotengu monster girl entry to make the moves descriptions more universal. I have not changed how they work or function in anyway, just description updates and Student Uniform's charmed counter being increased from 20% to 33% (seems abit too weak compared to the other outfits).

Lady Malboro wrote:I have not changed how they work or function in anyway, just description updates and Student Uniform's charmed counter being increased from 20% to 33% (seems abit too weak compared to the other outfits).

There's actually a couple of functionality changes from the rewritten version, Uniform aside, if you don't mind fixing it.

1) She's supposed to be weak to Wind and not Lightning, which is separate in my Revamp Magic version (still using that version because I'm more familiar with it).

2) Buffing the uniform CC gain is OK, but it's supposed to just be "Wind" damage instead of specific spells so it can cover the Enchant Weapon ability and Wind God's fan.

3) Qipao is only supposed to lock out Spellbook abilities so characters can still use utility or physical skills.

I just changed Qipao's description, and removed the x1.5 Lightning weakness. As Wind isnt an element for the base version i wont ammend the School Uniform but we can make it clear the modified spellbooks and anyone using Enchant Weapon with wind as the chosen element are whats being used

along with 1.5x Wind damage modifier. (Only because it will take me foreverrrr to add Wind to each and every monster girls entry).

Is Alexander supposed to be 3 Movement at 110 Stamina?

I guess I'll add in my own Ramza to the battle and be the first person to draw a card.

I'm hoping for 1 or 2 more participants and then we'll probably start on the weekend.

My bad! been changed now

P.S. I've also ammended "X-Item" to do what your tweaked version does for base game now. Noone currently uses "X-item" and i think your version would make it more viable in general!

If there is any space left, I'd like to give this a try with Driakoi. Thanks

>Lulu sacrifices 50 Speed to draw from the Tarot deck.
>Drew the Magician (I) card!

Alright, we have like 7 slots filled - Last call for Tarot draws!

I'll need to do a bunch of write up and calculations, but we should be just about ready to begin.

If I knew what the Tarot Cards could do, I'd consider giving it a shot.

To clarify, are cards one use only, or can they be used multiple times?

Rdishon wrote:To clarify, are cards one use only, or can they be used multiple times?

The Battle Has Begun!

"My deception... rules all of creation!"

>Variant Rule: Sleeper Agent goes into effect!
>The traitor has been decided!

A strange sensation overcomes Astrid. With a devious smile, she does a quick twirl, changing into the outfit of a Tengu follower. A feeling of nostalgia settles over her, as if she has had felt the experience of being such a majestic winged creature in the past... or perhaps, something similar, but she soon turns her attention to her "teammates"

>Astrid has been converted into a Tengu!
>Astrid is Awakening! She will take 50% reduced damage but miss at a 50% rate for the first 3 Rounds!