MGCC: The Book of Blue Magic (Work In Progress)

MGCC: The Book of Blue Magic (Work In Progress) 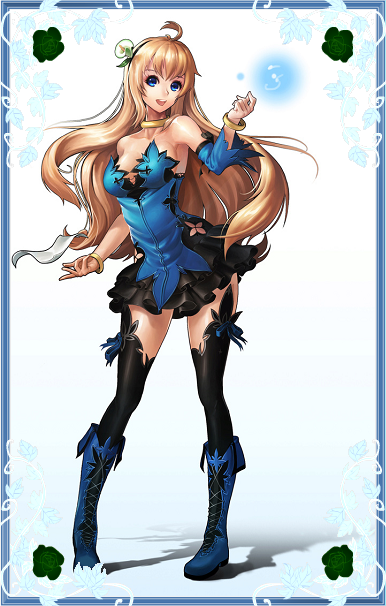 Livia here to reintroduce you to a craft that the higher ups originally though to dangerous for us to utilize but hey desperate times call for desperate measures right?

So what is Blue Magic you might ask? Well its where totally careful and capable individuals (such as myself ^_^) went out to study those seductive and sexy, I mean evil and fiendish monster girls to learn their secrets and hopefully new ways to combat them. What's more satisfying than using the enemies own skills against them to kick there butts? Sure there's some side effects but who cares?!

Using these techniques are far more fun than sitting around studying black/white/chaos magic like those fuddy-duddy's Tarvis and William?

Now if you'll excuse me, I have more hot, steamy...research, YES! Research to do.

This cool green haired chick named Morrigan promised to give me the inside scoop on succubi so wish me luck!

So here are the first 5 spells abilities. Most of these abilities are water downed versions of the actual monstergirl abilities or thematically similar to the monstergirl they are inspired after.

The aim for the Blue Magic spells stemmed from two thoughts

1. Versatility - The Blue Magic spells are designed to give the user a bit of each of the three current Spellbooks (Black/White/Chaos). A variety of options but with cooldowns that require the users to not just spam one or two spells.

2. Risk vs Reward - The other idea was since these spells draw their inspiration from monstergirls who's sole preoccupation is seduction and conversion it makes sense that each of these abilities have a catch to it, get something good or do something but potentially compromise yourself or your allies. The more powerful the ability's positive effect, the greater the risk to yourself/allies.

While I originally wanted to scale some of the powers in proportion to the rank of the monsters but felt that some of them, even watered down, would be too overpowered.

Without further delay, here they are

Jemnezmy
Fascination (1 turn cooldown)
Transfer your charm to another ally. The ally gains positive condition Lucky Stars and the negative condition Confusion. If the ally reaches 100% Charm Counters, they become Charmed. Use of this ability has a 10% chance with each use of the user becoming a Jemnezmy, becoming an enemy to the party. (20% on second use, 30% on third use, so on)

Jewel Princess
Gem Barrage (3 turn cooldown)
The Caster of this ability summons 3 gemstones that attach to the three nearest targets in spell range. (Random roll if more than three targets in range) The Gem stone absorbs 10% Charm/Hardness each round. When target is reduced to 0% Charm/Hardness, the gem breaks and inflicts the target with a random negative/positive effect for every 10% drained.

Mimete
Charm Buster (4 turn cooldown)
The Caster channels any amount of their current Charm Counter % to inflict half the total amount against one enemy target. This damage cannot be blocked by Barrier.  For every 20% Charm Counter used, the Caster of this ability gains one random negative status.  Caster must have a min of 20% Charmed Counter to use.

Monster Girl Nurse
Rejuvenate (3 turn cooldown)
The user breaks a sample bottle on the floor releasing the contents, healing all allies within 2 squares of the user for 20% of their max health and inflicting Allured condition on them.

Ricobandera9's old groups have some monster bestiary's in them made by members that could be useful as source material. I think their Adobe or Powerpoint.

They all seem pretty well balanced and usable so far (Aside from maybe the Jemnezmy one, since it has the potential to just lose you the entire battle for so little gain.). The only other thing is; How do we actually acquire these powers now? Would it be with a skill, would we need to be hit by an attack, or would we just gain it from being in a battle with the monster girl in question?

If I recall correctly, the Blue Magic Spellbook was just another spellbook, like White/Black/Chaos, and was an option as an ability.

Liking what i see so far! Keep up the good work

What i think i'll do is add the Blue Magic Spellbook to the main character abilities post but allow people who run their own battles to decide if they would like it included or not. I'll leave access/ ability to learn down to tilltherewas1 to do decide.

I recall the old monster girl pdfs. If i'm not mistaken those were some of the precursors for the Villainess' for the game. I really should look them over again for some more inspiration.

Originally Blue Magic was going to be its own spell ability just like the Black/White books but had to be removed to issues with balance and coming up with ideas that didn't clash with each other or were too similar.

As for Jemsemny's Fascination, LM (and later myself) had originally had a few abilities that would be powerful but with greater risk to the players, usually the ones that stem from the stronger monstergirls. It was to be a thematic concept; kind of like when good girls use evil powers, it corrupts them into villainess. Jem's isn't the only one like this; in fact her's is one of the ones that takes longer to potentially happen. Of course these could be tweaked a bit more.

I originally was just going to have the Blue Magic spellbook be an all access; maybe with the restriction that you couldn't have the other spellbooks as one of your other actions, since it was going to inherently be a mix of damage/buffs/debuffs/heals. Its kind of the reason why I added the Livia intro, since she was originally meant to be a blue mage.

But as for unlocking abilities...hmm. I'm not sure how I'd want to do it, maybe have it accessible but only so many spells to start with (like spell D&D Spell slots?) Might have to make a poll to get folks opinions. Lemme get back to you on that.

Hey everyone...Livia here again. Fresh from my latest escapades delving into the the amazing and sultry arts of Blue Magic!

I'm proud to say that my meeting with the lovely....sensual....amazing Morrigan when swimmingly. She's really eager to meet everyone one and help us out! Infact, she's meeting Tiffany right now! Isn't that awesome?!

Well any who, here's my latest notes gathered from my intimidate meeting with Morrigan. Feel free to look them over while I go and put a set of glyphs inside the girls dormitory, that she requested I add. For our protection and ease of access for her to visit, of course.


Cheerleader
Cheer On (1 turn cooldown)
The user cheers for their allies, gaining 10% charmed counter for each ally. It grants each ally a random positive condition. Unusable if Caster has 100% charm counter.

Deneb
Pumpkin Bomb (3 turn cooldown)
Target a 3x3 space. A large pumpkin falls and damages all targets inflicting 20 damage and a negative status depending on the type of character: Heroines suffer "Immobilize" for 2 rounds, monstergirls suffer "Disable" for 2 rounds, and Heroes suffer "Confusion" and a pumpkin helmet overtakes their head, starting pumpkin conversion over the next 3 rounds, after which they become enslaved and switch sides. A pumpkin helmet has 20 hp and if destroyed, prevents the  conversion. A converted Pumpkin Slave can use this ability.

Morrigan
Succubus Embrace (4 turn cooldown)
The user grabs a hold of a monstergirl and drains HP equal to their current charm counter. You heal your own HP equal to the amount and the monstergirl gains 25% charm counter. The caster of this ability also gains 1 Shadow Servant counter, per use of this ability, adding the caster a random condition. If the Caster obtains 4 Shadow Servant counters, they are converted into a Succubus and fight against the party.

Miss Milky Breast
Pleasurable Distraction (1 turn cooldown)
The user targets one Villainess in range and begins sucking on their breasts. The user gains 30% charmed counter and causes the Villainess to skip their next turn. Unusable if the user has 100% charmed counter.

Neko
Furry Lead (2 turn cooldown)
The user attaches a fur collar and lead to one ally in range, preventing them from moving more than 1 square away from the user. Increase their attack/spell damage by 10% and gaining 10% charmed counter per turn. You may only have one active Furry Lead at a time.

Personal Stylist
Costume (4 turn cooldown)
Prevents an ally from being targeted by monstergirls by disguising them as a low level monstergirl. This effect last until the 'Costumed' hero/heroine takes a hostile action against the monstergirl. If the ally remains 'Costumed' for 3 rounds, they become Entranced. After 5 turns, the become converted to a random monstergirl (see Fashion Tips).

Pollensalta
Toad Song (3 turn cooldown)
The user sings a frog inducing song, turning 3 targets (one of your choice; two random) on the battlefield into a frog for 1 turn for each 10% charmed counter on them. Frogs cannot act during their turn but may move one space.

Succubus
Alluring Gaze (2 turn cooldown)
The user locks eyes with an enemy, gaining 10% charm counter. The enemy affected by Alluring Gaze must focus on the user; moving towards them and cannot attack any other target except the user. The enemy may not use any multi targeting abilities. If the enemy has no action that can effect the user or target the user, the enemy many not use an action. (Passives still work as specified.)


Hey everyone, here's the latest batch of Blue Magic. A few of these abilities I'm not a 100% sure on in terms of balance. So feedback is most definitely appreciated.
Also, feel free to recommend which of the other Villainess' you want to see next.