Madame Mimic Has Been Encountered! 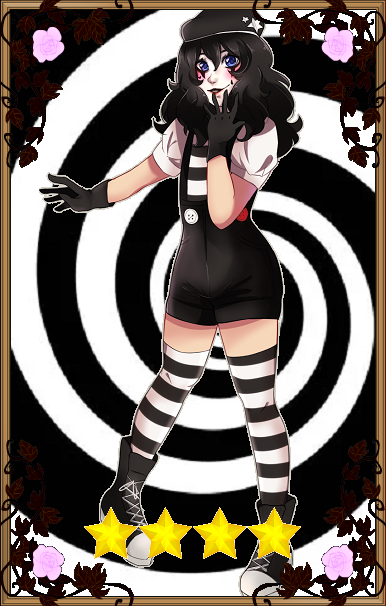 (Can be stolen an multiple number of times, however, characters can only carry one Invisible Wall at a time. Use up the item in order to block one directional Ability or Attack. An Invisible Wall will not block visual or light based attacks or abilities, for obvious reasons, nor will it protect against Madame Mimic's "Trapped Only in Your Mind", for equally obvious reasons.) Note: This battle will be using 065227n's "Revised Magic" rules (for consistency and maximum laziness), please take a read if you are using a Magic character!

Here, have a Blaine. He may not always be successful, but he tries his best.

Chandra, Cecilia, and Blaine have entered the battle.

Let's enter with Rias, if still a place is open.

Rias has joined the fray.

Alright, it doesn't seem as if we're going to get any more players anytime soon, so I guess I might as well start this off.

The Battle Has Begun!

Deep in the monster infested heart of the sealed district, the sage-fox Xiaomu stands at the edge of a wider empty plaza, leaning on her staff and staring at the incongruously innocent sight before her: A mime, dressed all in black and white, seemingly engrossed in her performance.

With that battlecry on her lips, the golden hair vixen charges forward, mystic energies gathering in her hands and flying at her quarry in a slash of cold blue flames before she launches herself into the air in an amazing, inhuman leap.

Chandra moves down 3 and move right 3

She calls up to Xiaomu "Thanks for the clear shot!"

"Thanks for the clear shot!" Chandra calls up to Xiaomu as she releases her arrow.

Shot through and burning with mystical blue fires, the mime looks at her attack with an exaggerated pout, her gloved hand miming a trickle of tears down her chalk white cheek. Walking steadily toward the group, she halts in their midst and throws her arms wide, demandnig everyone's attention, then, with a suggestive wink at the archer who shot her, begins to slowly and seductively caress an invisible female body lost in the throes of indescribable passion and blissful pleasure inflicted by her skilled hands. The message is clear.

"This woman is no mere performer...I must awaken my companions!"

"Now's not the time to dream. We must deal with this monochrome menace."

Sucks I can't move close enough to hit that sucker with magic.
So let me go up two squares up.
And then flirt with our little mimic.
"I bet you would like to touch such nice breasts
like mine, instead of pretending to touch an imaginary wall!"

You can, actually. Your Stamina is listed as 160 giving you 4 movement (which is just enough) rather than 3. So, I'm holding this turn open for you while you decide.

Then let's go 4 spaces up and shoot a firebll at the mimic monster.

"Burn in hell you evil thing.
We won't fsll for your petty tricks!"

"Burn in hell you evil thing.
We won't fsll for your petty tricks!"

The mime puts her hand chest, giving Rias a look of wide eyed innocence. Tilting her head to one side, she puts her other hand to her ear as if listening to something far away, lifting one finger after another as if counting and then, suddenly she launches into the air... just as Xiaomu did not  too long ago.

>Xiaomu lands from her Jump. Madame Mimic is in the air, and is unaffected.

Coming down from her leap just a hair's breadth to late, Xiaomu misses her prey entirely. "Oh, come on!, that's gotta be cheating!" she fumes, stomping her foot in frustration.

>with nothing else useful to do, Xiaomu ends her turn.

Cecilia sees their opponent launch high into the air just as Xaiomu comes down. "I cannot strike her now, so I'll take this reprieve to help the others." the knight says.

Move three squares up and use Purify on Blaine.

"I cannot strike her now,"  the knight says, "so I'll take this reprieve to help the others."

Blaine awoke with a start, surprised to find himself in the middle of a battlefield. "Did I just get put to sleep by a mime?" he asked, confused, before glancing around to find the foe. His confusion turned to alarm when he noticed the mime in question high in the air above Cecilia.

"Thanks for the healing, milady knight, but I'm just going to move away a little now!" He exclaimed, quickly scarpering.

Isn't my magic still casting?
Or does it automatically stop when the Mimic jumped since it would release this
turn and miss it's target?
If I can move move 3 to the left, hoping to evade the evil mimic's Jump attack!

With a loud thump as she hits the ground, the mime falls comically on her ass at Cecilia's feet, startling the lady knight. Clambering to her feet and dusting herself off, she raises her hands before the knight's face, capturing her attention then, signalling for her to wait, she pretends to pull something from behind her back. With a flourish, she presents the heroine with an invisible video game controller, tapping buttons and moving stick expertly as Cecilia despite her better judgement finds herself watching with fascination, her hand unconsciously reaching out to touch the strange, imaginary object and, to her astonishment, she does, her fingers pressing against what by all rights should not be there.

Taking advantage of that split second of utter surprise, Madame Mimic reaches under the imaginary controller as if to removes a small part of it and, with a wide grin on her black painted lips, stabs it directly into the center of the lady knight's forehead!

>Madme Mimic  lands from her Jump at Cecilia, dealing no damage.

>Madame Mimic moves 4 spaces up, and 1 space to the right.

Watching helplessly Madame Mimic do... something strange to Cecilia and recognizing the mime's movements from decades of gaming experience, Xiaomu rushes toward the mime in a desperate attempt to grab what she's sure is game controller out of her hands, only to find her hand pass harmlessly through thin air.

"Oh, come on! I call hax!" she growls before she once again leaps into the air and away from her enemy's reach.

>Xiaomu moves 1 space to the right and 2 spaces up.
>Xiaomu attempts to Steal from Madame Mimic, but is unsuccessful.

Helpless to resist, Cecilia is controlled by an outside force! (please feel welcome to roleplay her actions)

Cecilia had seen the attack coming and braced for impact, only to find the mime woman falling in front of her instead. The knight found this opponent to be so very strange and though she knew she should take this chance to strike she was an honorable woman. What came next was the monochrome maiden doing...something? Cecilia was completely baffled by the button pushing on a device that didn't seem to exist. "You...you realize we are fighting, correct? What are you doing?" Cecilia asked and pushed her hand forward. To her surprise, there was something there she couldn't see.

The knight had gotten careless, and was so focused on figuring this mystery device out she hadn't noticed when Madam Mime stuck something invisible to her head until it was too late. As the device went to work Cecilia's eyes turned pure white, her body a slave to the controller. She was compelled to move, her body not responding to her commands. "I can't...stop...player needs to be defended...ugh..." she struggled to say as she cast Barrier around her enemy. It was a struggle to even speak like herself without falling into a more drone-like personality.

Blaine watched the Mime's "attack", standing rather confused by the entire exchange. However, it became far more clear what had happened when Cecilia, as though moved by an unseen force, turned to shield the strange woman from his wind magic. "Uh, guys? I'm gonna need that barrier removed, I've got some strong magic on the way!" He called to his guildmates, before muttering, "Hmm, strong magic... I think I might have an idea..."