Bubblegum Girl Has Been Encountered! 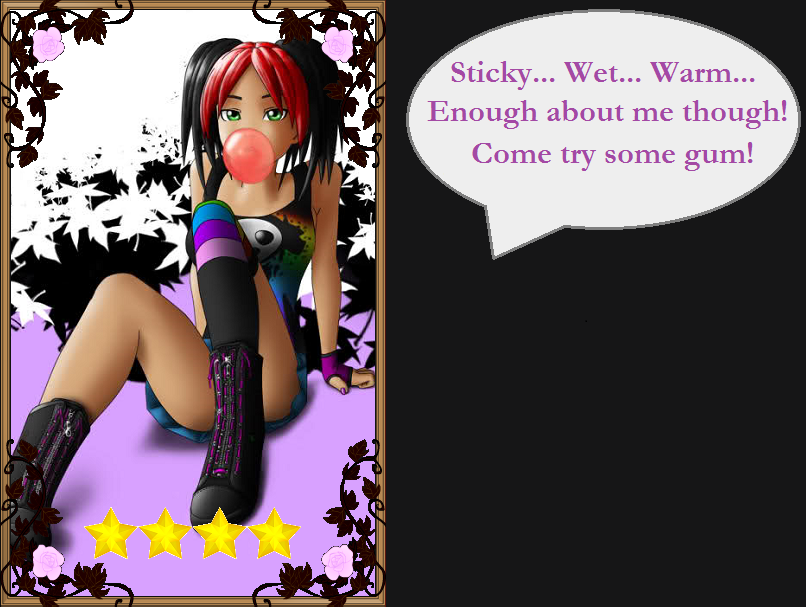 (Bubblegum Girl becomes unable to use her "Try Some, I Insist" ability more then once per battle. Character gains 20% charmed counter for each turn they hold Bubblegums Girl bubblegum, returning it to her once they reach 100% charmed counter. 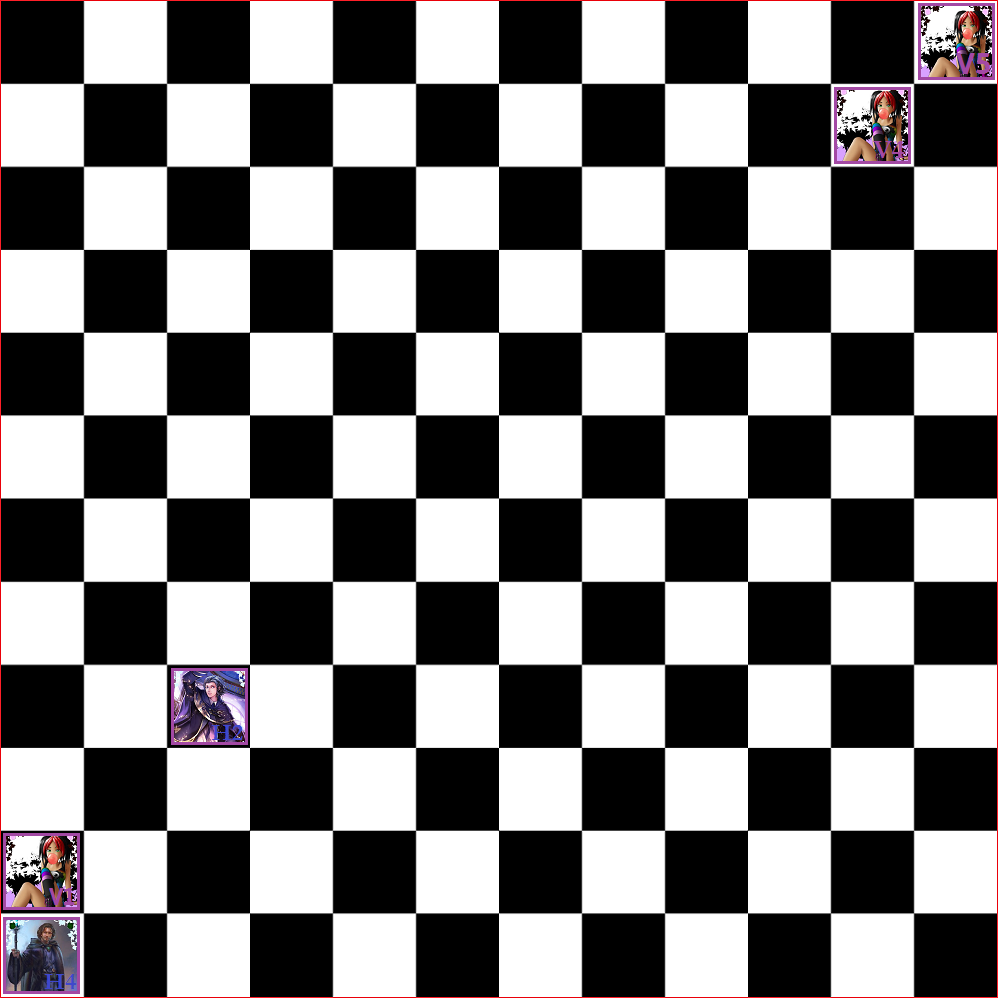 
To join this battle, post on this thread requesting to join with your selected Hero/ Heroine. If you do not have a character designed please check the Monster Girl Collectible Card Profiles thread and create one!

Note: During this encounter any target who are enslaved, converted, brainwashed or hypnotized can play their turn instead of myself acting for them (just remember your under the monster girls control and should act like your a Villain now, forfilling the monster girls wishes in the most efficient way possible).

Amelia is in for this fight!

Taking a bit of a gamble but going William this fight

Breena's ready to get started!

Amelia, William and Breena have entered the battle! Room for 3 more!

May as well throw in Blaine. Was considering Astrid, but I feel like a one hit conversion would not be a good start for her first battle.

Let's try Sein again. See if she can be useful this time!

Blaine and Sien have been added to the battle! Still room for 1 more!

Hmm doesn't look like any other takers. Maybe we should start the match LM?

I would like to join, though I am currently on vacatuon I didn't want to since I never know when I can reply.
If that would be ok count me in with Rias.
If I take too long some one else could take her turn.

Rais has been added to the battle!

I've made some changes to Bubblegum Girls abilities to make the battle abit fairer, targets affected by her "Try some, I insist!" will still be able to take their turn with some restrictions before being converted into a Bubblegum Girl themselves at the end of their turn. This should prevent the back-to-back converts im sure everyone was worried about.

Adjustments have been made to some abilities, actions, spellbooks and attack damage ratios due to the new elemental weaknesses being added, be sure to check them out for taking actions!

The Battle Has Begun!
It looks like we are ready to go! If your playing, be sure to keep an eye out on this thread!

Bubblegum Girl forcfully embraces Amelia, quickly kissing her and forcing her mouth open before she has time to respond "mmmmm..."
forcing her bubblegum into Amelias mouth she breaks her kiss as she brushes Amelias cheek with her hand.

>William moves down one.
>Cast "Ensuna" on Amelia
>Moves up one and left one

Sein decided to start moving in (3 south), then began a long cast...

(question, will esuna save me, or is Amelia still chewing but able to move and pretty much building charm metre?)

slayer40k wrote:(question, will esuna save me, or is Amelia still chewing but able to move and pretty much building charm metre?)

Amelia will be converted at the end of her turn unless she is KO'd. Esuna was already used by William on Amelia which removed the charmed status but not the Unable to Move as Amelia is still next to Bubblegum Girl!

But Ensuna removes all negative conditions, wouldn't that include the immobilization, or is this a more of a grapple that would require say Aero?

tilltherewas1 wrote:But Ensuna removes all negative conditions, wouldn't that include the immobilization, or is this a more of a grapple that would require say Aero?

Its her passive that is applying the 'Unable to Move' state, so it is/ was reapplied again soon as it was removed as Amelia is still in range of Bubblegum Girl.

Lets Stick Together! (Passive).
Any Hero or Heroine in range of Bubblegum Girl become unable to willingly move away from Bubblegum Girl. If Bubblegum Girl moves or is moved away from anyone affected by this ability they become able to move again. Any character who are stuck next to Bubblegum Girl gain 10% charmed and, if a Hero, hardness counters at the end of their turn.

Lady Malboro wrote:
Its her passive that is applying the 'Unable to Move' state, so it is/ was reapplied again soon as it was removed as Amelia is still in range of Bubblegum Girl.

Well shit and seeing as no one in the party has Chaos magic, no one has access to Aero to prevent it.

Amelia was preparing herself for the encounter but second she took her eyes off the bazaar looking chewing girl, she was sucker punched finding herself face to face with the monster. She tried to use her magic but her arms were quickly binded by the monster tight grasp. Amelia struggled to escape from her as the monster leaned in and forced a kiss from Amelia, invading her mouth.

What seemed like an eternity soon ended as the monster girl giggled stroking Amelia's face and running away. Amelia in her rage quickly set off a blizzard spell at the Bubblegum monster. As she tried to catch her breath however, Amelia noticed there was something in her mouth. She ran her tongue over it and received a super pleasant sweet taste from it as it stuck to it.

She quickly realized it was bubblegum, much more tasty and pleasant than anything Amelia had ever tasted. She quickly begun to chew it and felt like she was falling into bliss. Amelia quickly begun to forget the importance of the battle she and other were in as she let off a ditsy giggle and smile as she gave into the joy of chewing it as her mind was quickly decayed.

"Bubble gum? What is this, child's play?"

(Four diagonal works, right? If not, up one, cast, up one, right one.)

"Alright then, lets get started!" Blaine readies his staff, only to realise one of guildmates has already succumbed to the Bubblegum Girl's attack. "We've got to take down Amelia fast, we've got enough trouble with one of them!"

"I hope we get this over with quickly," he mutters to himself. "I hate using ice magic."

Since just going near her already "kills" you, I am not really comfortable with any magic that isn't insta cast.

So let Rias go one left two down and cast some ice up the bubble gum Amelia's ass!

Seeing her guildmates already fighting the monste girl,
Rias cursed at her own low agility.
"Let me help you take care of Amelia!
We have to beat one as fast as possible!"

"Hey there sweetie, fancy a kiss?" Bubblegum Girl teases towards William as she leans in for a kiss. As William suffers a quick lapse in concentration and leans in for a kiss Bubblegum Girl back she blows a large pink bubble into his face that engulfs it trapping his head inside a bubblegum bubble of sweetness. After a quick struggle William becomes immobile with glee, unresponsive to the rest of the battle.

The fight was getting too close for Sein's comfort as-yet, but she needed to keep going with her cast, try to get the party's resistances up...