065227n wrote:If Lulu gets cured of her confusion, does she stop charging the spell on Nove?

She can choose to cancel it yes.

nove saw what happened, taking aim at ivy she lept into the air .

Tiffany shook her head in confusion wincing from the poison."Ugh, my head. I haven't felt this messed up since the guild's heroine barracks held pledge week."

Amelia rubs her head from Tiffany's attack. "Oww! What the hell is wrong with you? I'm on your side!" Amelia sees things clearly again and spots Ivy. "It's that plant bitch doing it, she's going to burn!"

"Struggle all you want, you will soon be added to my collection of plants!"

Long vines emerge from the ground and coil and twist around Marisa binding her completely and cocooning her in place. A single vine shoots up and blooms a bright pink flower that wraps itself over Marisa's face as toxins begin pumping into her body...

The vines binding Marisa  stretch over and catch Yasmin, restricting her hands and legs as more vines grow below her and wrap around her body, trapping her also. As the vines tighten a flowered vine latches itself onto her face also as they pump toxins into her mouth!

> Marisa (H2) is trapped in vines and unable to act!

The strike manages to shake Lulu out of her confusion, and she sees the scene playing out before her.  It wasn't turning out well, due to two of the others being wrapped up and...fed something through flowers.  Even though she felt the sting of pain from Tiffany's attack, and the drain on her from poison, her resolve spurs her to help stop the bind.

(OOC: Let me know if I need to edit anything.)

DrgnmastrAlex wrote:(OOC: Let me know if I need to edit anything.)

(You can use X-Ability to cast 2 different spells from the Black Magic spellbook, breaking the vines in one turn.)

(For the record, I think you actually have to cast two different spells, but in practice there's no real difference in this cast because you can just use the Ice/Lightning tier 1 spells alongside Fire for the same effect)

Just thought i would remind everyone of what "In range" means!

Lady Malboro wrote:Just a reminder and clarification for anyone unsure "In Range" means melee range, which is all squares touching the one occupied by Bunny Girl as shown here: 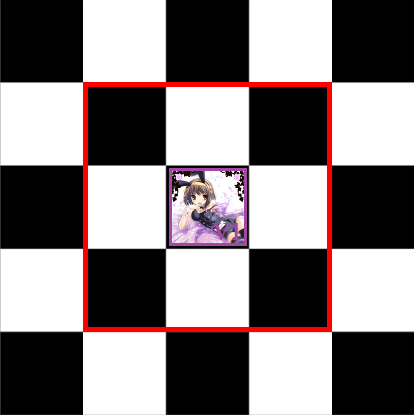 As Lulu approaches the vines from Marisa strike, binding Lulu hands and legs as more grow from the ground beneath her, completely binding her in a matter of moments. As the vines finish wrapping Lulu up a single flowered vine forces itself over Lulu's face as it begins pumping alluring toxins into her mouth...

> Poison Ivy's Pheromones have overwhelmed Lulu, enslaving her. Lulu will be converted into a "Venus Weed" during her next turn!

(Well this is going to be a short battle

Edit: Given my closeness to conversion, I guess I should ask in advance whether I can use X-Ability to use two Monster Girl Abilities in a turn or is it limited to standard abilities)

Edit: Given my closeness to conversion, I guess I should ask in advance whether I can use X-Ability to use two Monster Girl Abilities in a turn or is it limited to standard abilities)

Just limited to "command abilities" which are only selectable by Players.

(Damn, didn't think I'd trip up like that. Ah well. Sexy time. Too bad I didn't have nearly enough HP left to go Rafflesia Girl, but a Venus Weed is fine too.

> Yasmin (H1) is trapped in vines and unable to act!

Note: I thought it would be really unfair for Nove to land into her doom after 1 turn, plus i feel the square she would land on (below Poison Ivy) would be viewed as an obvious no-go in her eyes so i decided to allow Nove to land to the right instead! Jump will be revised in its description and damage soon!

Seeing the danger this threat posed, apon landing nove moved back as far as she could, but making sure she wasnt near the others, as grouping up seemed to cause more problems than solve.

Tiffany moves three down and one left.
Tiffany uses Remedy

Amelia spots Ivy moving up away from her spells range. 'Damn it, She's avoiding us grouping up so she can pick us off one at a time' she thought as she spots Lulu's wrapped up body slowly turning green and transforming into a monster. 'No! She's already lost' she panics as she heartlessly makes her choice.

"Forgive me, but death is a better faith than becoming one of them! Fira!"

Amelia finishes her casting of Fira and casts it on Lulu dealing 75 damage!

Although i have said before that spells with more then 1 turn channels will finish casting on their original target even if you moved out of range, i think it makes more sense and to make them more usable i'll change this to allow people to switch targets instead.

From now on any spell, command or ability that requires a cast time will no longer require you to indicate who your targeting or be in range, instead when you actually 'cast' the spell you will then select the target (as long as you are in range).

> Poison Ivy's Pheromones have overwhelmed Marisa, enslaving her. Marisa will be converted into a "Venus Weed" during her next turn!

The toxins, pheromones, and chemicals were too much for Lulu, and soon she was enveloped in a flower.  Inside, she quickly transformed, and as it bloomed, she emerged as a sexy Venus Weed.  Corrupted and enslaved to Poison Ivy, she let out a sexy giggle before speaking, her alluring green skin draped in vines and flowers.

"Hehe~  Thank you, Mistress~  It felt wonderful to bloom and become your pet.  I'll show the others the same pleasure in joining your garden of delights~"

She looks around to gauge who would be the biggest threat to Ivy at this point, as well as their positioning, before smirking at Amelia.

"You'll do nicely~", she smirked, before commanding the roots and vines underground to snare the heroine!

You can't use X-Ability with MG powers, but you did fine other than that. I liked your narrative.

Blastar wrote:You can't use X-Ability with MG powers, but you did fine other than that.  I liked your narrative.

Thanks for that clarification and the compliment. I'll edit the post and stick with Vine Bind, then. ^^