It includes some basic functionality, which should be fairly intuitive.  The only things that probably aren't intuitive are the adding and removing of characters from the map.  To add a character to the map, click their portrait (above the Change Portrait button), then click a space on the board.  To remove a character from the board, click them and drag them off.

I've included portraits and character files for all player characters and villainesses up to this point, as well as a sample game modeled off of where the Poison Ivy battle left off.

I probably won't add to or update this until after the next game begins (unless somebody finds a major bug), but I'm open to suggestions and bug reports.

I was toying with revamping the Magic skillsets. It may or may not be too early to use them in the next battle, now that the app is out. We'll see.

Chaos Magic:
Gravity: Inflicts Gravity condition on target, decreasing the targets maximum movement distance by 1.
Bio: Inflicts Poison condition on target, inflicting 5% of their maximum HP as damage per turn.
Blind: Inflicts Blind condition on target, decreasing targets physical attack accuracy to 50%.
Bind: Inflicts Immobilize condition on target for 1 turn, becoming unable to move or use "Turn Away" action ability. (2-turn cooldown)
Quid Pro Quo: Transfer all negative conditions from one ally to another.
Haste: Reduces an on-going cast time of another target by 1 turn (Each spell may only be Hasted once).
Slow: Increases all current cooldowns on the target by 1 turn.
Draw Wounds: Removes charmed or hardness counters equal to 30% of Magic from a target, but caster receives the same amount in return. (Female characters drawing Hardness counters from Males will convert to Charm Counters instead)
Meteor: Deals 150% of Magic as damage to all enemies on the battlefield. (5-turn cast).

I feel like the White Magic kit may have a little too much offensive capability with these changes. I mean, its nice that they can fight stuff better, but combined with the healing spells, it just makes it seem like a better kit to choose than Black Magic overall. On the other hand, the Chaos Magic additions look good.

I agree with JK, the White Mage should be a bit more focused on support and healing. The holy options are good (and should be their niche for damage if say vulnerabilities are added to any of the monsters)

On the White Magic feedback:
The ones I'm thinking of dropping are Twister, Divine Light and Holy (Judgement would be renamed to Holy since I think that's more iconic)

(The drawing point for this White Magic skillset is FFXIV's WM)

Personally, I think that drawing from the source, White Magic Holy elemental attack spells should only be on the high end while the lower end spells are more for utility.

So that would leave it with:

Since Black Magic now has Zombie, there's also the hidden attack option of casting Zombie on the target, and then using your healing spells on it instead, which will do more damage but doesn't have status effects.

On Black Magic:
Trying to put in more utility, but there's not a lot of fitting things I can use. I think I could put back Drain if HP loss actually meant anything right now but if anyone who has ideas for utility Black Magic can suggest some. 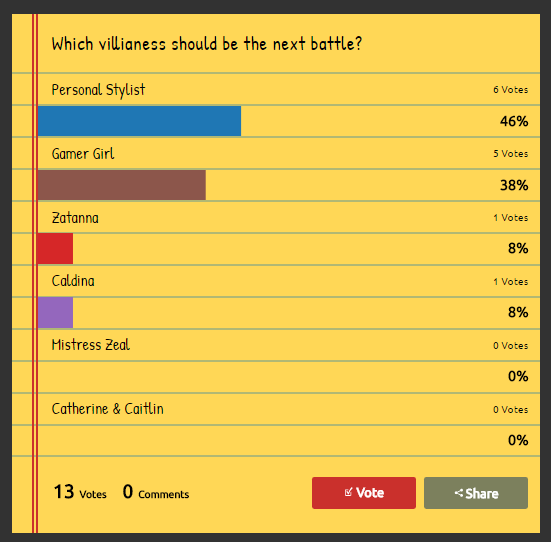 Keep an eye out for the upcoming battle!

(So here's your chance to get in on some Rules Clarification

Makeup Teasing states "using it on the nearest player in range" - do you guys think that means she can use it from afar? Since if it was just adjacent characters, there isn't a "nearest" or "furthest" because they're all at 1 range. It does seem odd to apply makeup from afar though)

Hey everyone! I would just thought i would update everyone on me (spoiler, i'm not dead). As some of you know back in February my computer suffered a minor explosion and it took me way too long to repair it, when i finally got it fixed i noticed that everyone had really dropped out of interest in my game. I have had a very hectic schedule at work for awhile now and couldn't really find the time to work on MGCC (mainly due to editing posts and tracking everything takes alooooooong time for just me!

Although it may of seemed like it i have not abandoned my game, what originally started as just profiles for popular villianesses turned into a full blown RP forum game and it it still close to my heart! I still have many ideas for improving my game id like to work on at some point however its something that will take a lot of time and i would love to have support in to forfill.

Currently i am still quite busy but i would love to hear if others still are interested in this game or any of my suggestions.

P.S. Blastar i have been messing with your program and i love it! its stuff like this that i need to simplify the game back-end wise!

I would be interested in a computer program version, and a website might open up more formatting options compared to forum posts, but I don't really think it should have a new forum because it will split the userbase. I would certainly be interested in any developments made to the base game rules.

Nothing to be embarrassed about, i'm perfectly happy for other to play GM infact i would encourage it!

Ideas i have had for base game changes other then small tweaks would be removing charmed and hardness as a % and changing it to flat points (capping at the stat point cap of 250). I would then change health into resistance or similar meaning players could build more anti-charm builds rather then it being generic for all players. It would take awhile to implement as i would have to change every instance of charmed/ hardness counters into flat amounts and then rework conditions such as Poison, Protect and Shell to forfil a new role.

Yeah, I'm definitely still interested in this, so I'm board. Sadly, I have very little programming experience, and what I do have is rusty as hell and wasn't very good even when it wasn't. >.>

I too remain interested in this and am glad to see you back!

Looking forward to see what else comes of this game. Hmm i need to re-dig up those Blue Magic ideas i had for you

I'm glad you like the program. Do you still have the overlays you used for the hero/villain card borders and the rank stars? If you would share them with me, I could add in a feature to make the cards and generate the profile BBCode.

Oooooh, this should be good. :3

(Going to try and find a bunny girl pic of Lulu now. Although I'm curious as to what the Stylist has planned for her next...)

So with the Personal Stylist match pretty much completed, shall we begin voting for the next match

Hello everyone! I have been busy updating aspects of the game and adding all new stuff! Some of it has already been implemented and others will be added as i go.

The upcoming changes will take along time for me to fully implement as i have to go through every ability on every Villainess so be patent please!

I'm going to set this aside for a while and let Lady Malboro finish her changes, but I wanted to share what I've got.

I forgot to mention it, but is it possible to shrink the app's window size? On my screen resolution which is the biggest (1372 x 780 or something), the bottom parts are still too high to access.

Yeah sorry, that took a while to actually put the finishing touches on.

Do you guys want to do the whole "Pick 3 monsters and then I'll compile the new list" again or would you like to just reuse the old poll list minus Personal Stylist?

Now I think the Speed changes I made turned out well though Personal Stylist might not have been the right monstergirl to test it on, since in this system natural double turns occurs very rarely which means only really slow characters will get tagged with Fashion Tips. It did what I intended it to though - just as an example, Sein was taking like 1 turn every 3 turns of the Stylist in the old formula and now it's just slightly more than 1 turn for every 2 turn of the Stylist.

For the next battle, I might try to bring in my new magic system (which will probably become obsolete when the system revamp shows up) and maybe introduce "minions" - weaker enemies usually picked from the lower stars with numbers more closer to the players than a boss to make the battles more complex. All subject to change, but that's the current plans!

I was thinking we just do the pick 3 monsters
Which if that's the case- Morrigan, Esmeraude, Mimete

065227n wrote:I forgot to mention it, but is it possible to shrink the app's window size? On my screen resolution which is the biggest (1372 x 780 or something), the bottom parts are still too high to access.

Alright, try this one: Link

I shrank the game board (it will still export normally), moved the board buttons to the side, and condensed the character stat panel.