Okay, finally I can put this up because someone went through the trouble of finding someone playing the entire demo.  So, a special thanks to the Upon Her Lips forum, our unofficial but very close sister forum, as well as the users Zesquid and quyzbuck123.  But anyway, down to the details...

Villainess: Melusine
Victims:  Mine workers, as well as all party members potentially
Method: A skill called "Nocturnal Gala" that charms the party.  Involves heart effects all around her, a blown kiss pose, large hearts that envelope the party followed by smaller hearts spiraling around them.  If it "hits", the victim will glow pink as hearts spiral across their head in a pulsing pattern.
Effect: Victim will fall under Melusine's control, heal her, attack party members with basic attacks as well as skills and magic.
Vid: (I'd advise you mute it) https://www.youtube.com/watch?v=2bNQjOxqZPM&feature=youtu.be&t=5801

Melusine's the first boss in the demo, and has apparently been causing workers to flee the ruins via charm magic.  Unfortunately it isn't THAT Melusine(FF5), she's a palette swap of the succubus/vampire characters from that game, but that ain't bad as all.  She has bat wings at her hip, a long cat-like tail, 2 sets of ears(pointy elf ones and bat ones on top), and quite the revealing and sexy outfit.  She has a charm attack called "Nocturnal Gala" that is a return to the classic Fascination attacks of FF7.  The name itself is quite interesting, perhaps it is meant to imply that moment when someone truly fabulous walks into the ballroom and draws all eyes to her, or when such a person ask you for a dance in which you go round and round as they gaze at you with passionate eyes and grasp you in such a way that you never want to be let go...  or both, hehehehe.

Funnily enough in my run through, the girls were the first to be charmed, usually Edea would be first, followed by Agnes.  That seems to be a pattern of most encounters with her(my second and the vid aboves).  Makes me wonder if they have lower resistances, hehehe.  There's also a item that makes you immune to charm called the Rebuff Locket, which has the "picture of a loved one kept inside". This of course gives me naughty ideas like A) Melusine changing the picture inside so the user would fall even deeper into her charm spell or B) a villainess selling such lockets with her hypnotic picture in them.  Also worth noting is Melusine drops a item called the Crimson Ring that has two sets of initials engraved into it.

And again, special thanks to Upon Her Lips and this thread for saving me a lot of trouble
http://uponherlips.forumotion.com/t954-bravely-default

I'm glad this throwback to classic Final Fantasy features the requisite sexy monster girls that charm the party (though my first time against Melusine, she decided to blast my party with Aeroga instead). I really hope she and the succubi get their fair share of fanart.

Also, and I know it's not our place to question the ways of good girls falling into bad girls' sway, but you would think a high priestess and a soldier from the world's superpower would have stronger willpower than some farmer and an amnesiac skirt-chaser.

Quartz Falcon wrote:Also, and I know it's not our place to question the ways of good girls falling into bad girls' sway, but you would think a high priestess and a soldier from the world's superpower would have stronger willpower than some farmer and an amnesiac skirt-chaser.

I think it makes them more vulnerable because of their naivety to the wiles of a mature woman.  The guys would be prepared, but the girls would think they would have no reason to be, hehehehe.

... That really makes me want go into a battle with K.O.ed guys and have a charm off with some of those cat/bat girls =)

Okay, I'm just going to say this, once you get to Florem(which by the way is awesome), go back over the bridges and then to the north most part of the continent(past the giant tree).  There will be a patch of deadwoods, and then a small little triangle of forest nestled at the top.  It will display a "Enter" prompt, so click it, and you will get a awesome reference from Ringabell related to FF7.  It's "relevant", trust me =)

I'll make a main entry when I'm not sleep deprived, but for now, THAT DESCRIPTION! 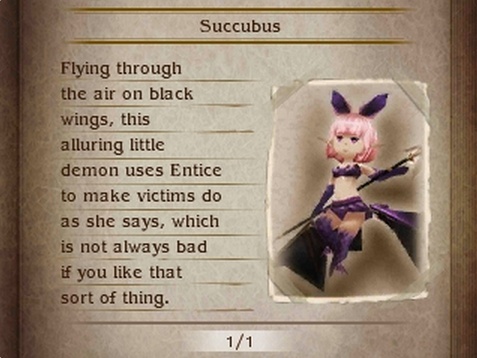 He is writing those descriptions, after all.

Also, that sort of stuff feeds into my plot bunny of Edea getting a seduction-based Asterisk and Ringabel just... going along with it as her wingman.

Ringabel: "I must admit it galls me to be bested in the matters of love. Still, it is quite heartening to see a mistress at work."
Edea: "You would be just as successful if you were more fashionaaabluh, dahling."